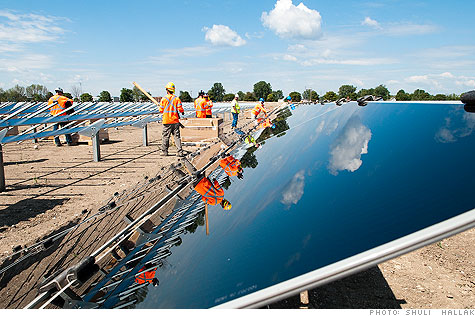 "Our goal is that solar lives in an unsubsidized world," says First Solar's Larry Polizzotto; a solar-panel field under construction in Ontario, Canada. By Richard McGill Murphy, contributorAugust 20, 2010: 8:28 AM ET

FORTUNE -- If you're looking for the future of American business, our annual list of the 100 Fastest-Growing Companies isn't a bad place to start. Of course, as they say on Wall Street, past performance doesn't guarantee future results. But every year companies like Genentech and Starbucks appear on this list before moving on to bigger and better things.

With that in mind, we scoured this year's list for a handful of rising stars. Three companies stood out from the 100 publicly traded companies on the list, largely because they are shaking up their industries, growing fast, and, best of all, haven't taken on a lot of debt. "Even if the stock market crashed tomorrow," says strategy guru David Thomson, "these three guys would have the cash to keep growing." Meet First Solar, DG Fastchannel, and Intuitive Surgical.

Driving down I-75 from Detroit to Toledo, you'll pass a giant Jeep assembly plant on your right. Next, on the left, is a hand-lettered WE LOVE CRYSTAL BOWERSOX banner clinging to an old factory wall, honoring the hometown girl with the bluesy growl who came in second on American Idol last season. Just outside Toledo, tucked behind a small strip mall, lies the gleaming complex where First Solar (No. 7) builds thin-film solar panels. Drive through its gate, and you are no longer in the Rustbelt.

The green energy movement has sprouted dozens of solar startups over the past decade, including a few on this list. They all depend on government subsidies designed to compensate for the fact that solar energy costs more to produce than fossil fuel. First Solar, which is heavily owned by relatives of the lateWal-Mart (WMT, Fortune 500) heir John Walton, stands out from this crowd as the low-cost producer in a classic commodity market where companies compete almost exclusively on price. In the wake of the BP (BP) oil disaster, it seems politically implausible that clean-energy subsidies will disappear anytime soon. And every year that subsidies continue brings First Solar closer to its goal of competing successfully in an open energy market.

First Solar (FSLR) was founded in 1990 by the late Harold McMaster, a Toledo inventor who figured out how to generate electricity by exposing a thin film of cadmium telluride, a crystalline compound with semiconducting properties, to sunlight. Last year the company, based in Tempe, Ariz., earned $648 million on sales of $2.5 billion, generated by manufacturing facilities in Ohio, Germany, and Malaysia. First Solar's revenues have grown at an average annual rate of 140% in the past three years.

Thin-film solar panels are slightly less efficient than conventional silicon panels, so in theory you need more of them to produce the same amount of electricity. But they work better than silicon panels in low-light conditions and require less maintenance. First Solar has also developed the cheapest manufacturing process in the solar-power industry, which largely explains how it became one of the world's largest solar-panel producers. First Solar's manufacturing costs worked out to about 87¢ per watt last year, down from $1.59 per watt in 2005. If production costs continue to decline at current rates, power plants equipped with First Solar modules will be able to sell electricity for about 10¢ to 12¢ per kilowatt-hour by 2015, comparable with electricity from gas-fired plants operating at peak daytime rates.

First Solar guards its manufacturing secrets jealously: Toledo plant manager Todd Spangler won't divulge how many workers toil on the immaculate factory floor, or what kind of metal compound is used to separate the individual cells on each panel. "It's just metal," he says affably. He does note that the plant runs four assembly lines 24 hours a day, seven days a week. First Solar expects it to produce about 236 megawatts of solar modules this year, or 17% of First Solar's global output. In the field the modules will be harnessed together into vast solar arrays that might feed 550 megawatts of AC power into the grid, enough juice to light about 160,000 average-size homes.

Although solar energy currently competes on price with fossil fuels in a couple of very expensive energy markets like Hawaii and California, that's not true in most of the world and probably won't be for at least a decade. To date, First Solar's growth has been fueled mainly by government subsidies in its two main markets, Germany and the U.S. "Our goal is that solar lives in an unsubsidized world," says Larry Polizzotto, First Solar's vice president of investor relations. "All subsidies should be designed to go away."

For the time being, however, subsidies can't go away without wrecking First Solar's business model. Spain, for example, was once a promising market for First Solar and other renewable-energy companies. Until 2008 the Spanish government offered one of the world's most favorable regimes for renewables, essentially guaranteeing energy producers a 25% return on their equity. That year Spain abruptly slashed its renewable-energy handouts, which had become unaffordable. Last year renewable-energy installations in Spain fell by 90%. For First Solar CEO Rob Gillette, his message for governments is clear: "We need consistency, so everyone knows what the rules are."

Read on for DG Fastchannel

And the winners are...

Fastest growers in your state

Giants on the move