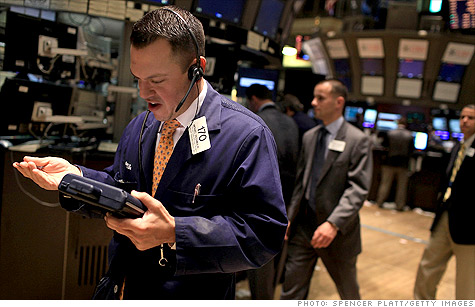 NEW YORK (CNNMoney.com) -- The air is quickly coming out of the recovery balloon, and economists have mixed views on how to pump it back up.

The National Association of Business Economists said Monday that three-quarters of members responding to its monthly survey believe that promoting economic growth should be a higher priority than reducing the national deficit.

However, nearly the same number of NABE economists said they do not think another stimulus package is necessary to halt the economic slowdown and get the economy back on track. At the same time, a majority believe that policymakers should do more to boost job growth.

The survey, based on responses from 242 NABE economists who work for private-sector firms and industry trade associations, comes as economic growth in the United States has slowed significantly after rebounding from a deep recession. Economists have been reducing their growth forecasts, and some are worried the economy could slip back into a downturn.

On Friday, the government said U.S. gross domestic product, the broadest measure of economic activity, grew at an annual rate of 1.6% in the second quarter. That's down sharply from the previously estimated 2.4% rate -- and way off from the 5% growth rate in the fourth quarter of last year.

Ben Bernanke, the chairman of the Federal Reserve, said last week that the current pace of economic growth is "somewhat less vigorous" than expected, but he remained optimistic for a pickup in 2011. He added that the central bank is prepared to provide additional "unconventional measures" if the outlook were to "deteriorate significantly."

The NABE survey showed that just under half of those polled see deflation as the main threat facing the economy in the short term. Deflation occurs when both prices and demand fall, creating a downward spiral that can stifle economic growth for years. But respondents were less certain about whether inflation or deflation is the biggest threat over the next three years.

In a sign of the challenges currently facing Fed policy makers, there was little consensus among the NABE economists on when the central bank will raise interest rates and begin selling off assets it bought during the financial crisis.

"The majority of the economists surveyed consider monetary policy to be currently appropriate, with greater disagreement over how the Federal Reserve should proceed over the next 12 months," said Lynn Reaser, president of NABE and chief economist for Point Loma Nazarene University.

After cutting rates to historic lows near 0% in December 2008, the Fed has been without its main tool for supporting economic activity for nearly two years. It has since bought billions worth of Treasury bonds in an effort to bring down rates for home and other consumer loans. But some central bankers are worried about adding to the $2 trillion worth of assets the Fed has acquired over the last few years.

Meanwhile, only 38% of economists surveyed believe the nation's current fiscal policy is "about right." But 64% supported recently enacted legislation that extends unemployment benefits up to two years.

One area where there was broad agreement in the survey was the question of tax cuts. A majority of economists said that none of the existing tax cuts on individual income, dividends and capital gains should be allowed to expire.

Congress has yet to decide the fate of more than 100 tax breaks that either already expired at the end of 2009 or will expire by the end of this year. Lawmakers return from recess next month.

The Buzz: Economy slowing to a crawl - or a halt?