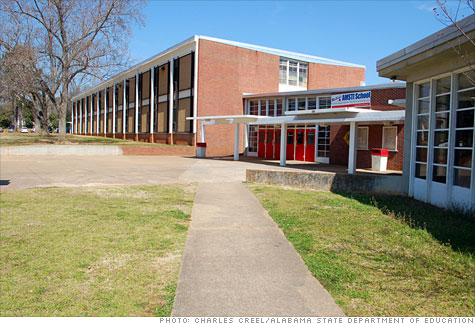 FORTUNE -- Alabama schools have been having a rough time of it, and it only looks like it's going to get rougher. The Cotton State recently came in last place in the federal Department of Education's Race to the Top grant competition. And a steadfast global recession combined with the Gulf Coast oil spill this summer have put a severe strain on the state's tax receipts, the primary source of revenue for Alabama's education system, forcing several school systems to take out private loans just to make it through the year.

Five school districts have already borrowed against lines of credit they have with local banks to fund basic school operations, and 25 additional districts are planning to follow suit in the next few months, accounting for over 20% of the state's school system, according to the Alabama Association of School Boards.

"We're suffering. We are on a decline. And then you throw in the BP oil spill on top of that, the loss of tourism dollars, that certainly affected retail sales, income, and other taxes. It has really taken its toll on funding education in our state," says Joe Morton, Alabama's state superintendent of education.

Over the past three years, Alabama's education budget has been cut by 20%, from $6.7 billion to $5.3 billion, and schools have been repeatedly forced to make due with mid-year reductions in state funding, also known as proration.

Unlike similarly struggling states like California, Alabama does not have a state-sponsored loan program for schools that lack funds to cover operational expenses. Instead, school districts must apply for loans with private banks. And, like any other loan applicant, they are subject to rejection.

Indeed, First Bank rejected Coosa County Schools' request for an additional $550,000 line of credit (up from $450,000) in June, according to the Associated Press. The state has since taken direct control of the district's finances.

While it is relatively common for school districts across the country to take out temporary loans to cover short-term expenses, like a given month's payroll, more and more Alabama school districts have begun to approach banks for credit to bridge state funding gaps that go far beyond a single payroll period.

"Borrowing from one year to another is much more difficult because it gets into a question of sustainability. It's a dangerous thing to do given the forecast doesn't look a lot brighter," says Rob Manwaring, senior policy analyst at Education Sector, a nonpartisan think tank.

While school districts are technically required to pay back all loans at the end of a year, they can just as easily refinance their loans and start the whole process over again.

"There's nothing in the code that says they can't renew it in perpetuity," says Ken Roberts, chief operating officer and director of research at the Alabama School Board Association.

School superintendents have been advised by state education officials to expect yet another round of 3-5% mid-year funding cuts in the coming fiscal year, meaning that schools will have even less to work with than the currently approved budget would have them believe.

"It starts a cycle of borrowing in anticipation of next year's state funds. It is an untenable situation," says Sally Howell, executive director of the Alabama Association of School Boards.

Tuscaloosa County Schools, one of the largest systems in the state, plans to have $8 million in outstanding private loans as of September 30. And the district borrowed $4.6 million last year, which it has since repaid, according to Patrick Conner, Tuscaloosa County's chief school financial officer.

"For two years, our school system has lost $17 million due to proration. We live primarily on state revenue," says Frank Costanzo, superintendent of Tuscaloosa County Schools.

In addition to cutting approximately 140 employees from its payroll in the past two fiscal years, Tuscaloosa has had to make severe cuts to its operational budget.

"We've cut every thing we can think of. We quit buying technology. Our teachers are not receiving one dime to support their classroom. We've taken our maintenance budget from $1.5 to $2 million down to $200,000 to maintain 33 schools. At some point, we will have a major issue and we'll have no alternative but to go to the bank, which is an absurd choice to make," says Conner.

At the heart of Alabama's school budget woes is a combination of having the lowest per capita property tax collections in the nation (a primary funding source for schools in other states), a constitution that prohibits local governments from independently increasing taxes, and a state-funded education system with funds that stem almost exclusively from income and sales tax revenues, which are both volatile and highly sensitive to economic conditions.

And when it comes to tax increases, most Alabamians are unlikely to budge any time soon.

"We have had three property tax referendums voted down two-to-one in the last 20 years. The residents here do not support a property tax," says Costanzo.

Part of the problem also stems from lax state requirements regarding how much money school districts need to maintain in reserves funding, a problem that is common across the country. Alabama state law only requires school districts to have a formal plan to acquire one month's worth of reserve funding, not to actually have reserves in the bank.

While the recently-passed $26 billion federal jobs bill will inject an additional $149 million into the Alabama education system's coffers, savings thousands of teachers' jobs for the current school year, it is only a temporary fix to a long-term problem, as federal stimulus money runs out or expires over the next few years.

"We've used the savings account. We've used the stabilization funds all to keep us from having to make these huge cuts. The budget that we are going to be writing in 2012 has none of those safety nets. We have arrived at the edge of the cliff," says Howell.

Alabama has made significant strides toward reducing its high school drop-out rate and increasing graduation rates over the past few years. And the system has invested millions of dollars in its statewide reading, math, and science initiatives as well as a virtual education system that provided instruction to 32,000 students this past year.

But all of these programs are contingent on funding that is starting to disappear, while individual school districts can't even afford to purchase textbooks or give teachers money to buy classroom supplies.

"The brutal reality is we can't afford what we have now. There are some very non-glamorous things we have to fund to keep the doors open and keep kids safe," Howell says.

Reducing the number of days in the state's school year is one of the less than glamorous suggestions that Howell put forward. But with election season fast approaching, it is far from certain that painful but necessary decisions will be made any time soon in Alabama.

"We've got a new governor coming in January. We've got legislative races in November. And it's going to be a real challenge, with all of the federal funding going away, how we balance our state budgets and keep our proven initiatives alive so students benefit from it," says Joe Morton, state superintendent of education.

"The expectations are higher, but the funding continues to decline. To say that there's not any negative effect on instruction is misleading," says Frank Costanzo, superintendent at Tuscaloosa County Schools.