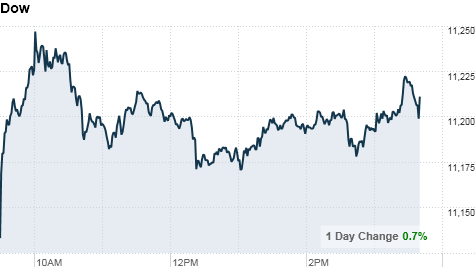 NEW YORK (CNNMoney.com) -- Stocks climbed to 6-month highs Monday after a report on housing sales came in much better than expected.

All three indexes had been up nearly 1% earlier in the morning, after the release of a strong report on existing home sales. Gains receded slightly as the day continued, but most sectors were still strong -- 23 of the 30 blue-chip Dow components were higher at the closing bell.

In addition to the strong housing data, stocks have recently gotten a boost from strong corporate earnings and bets that Republicans will win control of the House next week -- a shift that market participants believe will further lift stocks.

"President Obama has come out and said, 'I'm pro-business,'" said Kenny Landgraf, principal and founder at Kenjol Capital Management. "But if you have to keep insisting something over and over, it starts to sound like it isn't true."

Experts thought the election bets were already baked into the market, Landgraf said, but stocks have continued a somewhat steady climb throughout October.

Economy: Before Monday's open, Federal Reserve Chairman Ben Bernanke said that a federal agency review of foreclosure procedures at the nation's largest mortgage servicers should be completed next month.

Bank stocks have been under pressure in recent weeks, though, as mortgage servicers reviewed documents after allegations of sloppy paperwork surfaced. Bank stocks felt the blow, with JPMorgan (JPM, Fortune 500) down 1.7% and Bank of America (BAC, Fortune 500) off 2.5% Monday.

The National Association of Realtors released a report that said existing home sales shot up 10% over the month, to an annual rate of 4.53 million in September. Analysts surveyed by Briefing.com expected an increase to a rate of just 4.25 million.

Companies: After the bell, Texas Instruments (TXN, Fortune 500) reported third-quarter earnings per share of 71 cents, stronger than the 69 cents per share expected by analysts. Shares of the company rose 0.2% in evening trading.

Office Depot (ODP, Fortune 500) announced that CEO Steve Odland, who has led the company since 2005, is resigning his post effective Nov. 1.

The office supplies retailer also said it expected earnings per share of 18 cents for the third quarter. Shares of Office Depot rose 3.5%.

Asian markets ended the session mixed. The Shanghai Composite rose 2.6%, while the Hang Seng in Hong Kong was up 0.5%. Japan's Nikkei dropped 0.3%.

Currencies and commodities: The dollar edged lower against the euro and British pound, and it fell against the yen to as much as ¥80.41 -- a 15-year low.

Oil for December delivery gained 83 cents to settle at $82.52 a barrel.

Bonds: The price on the benchmark 10-year U.S. Treasury fell slightly late in the afternoon, pushing the yield up to 2.57% from 2.56% on Friday.