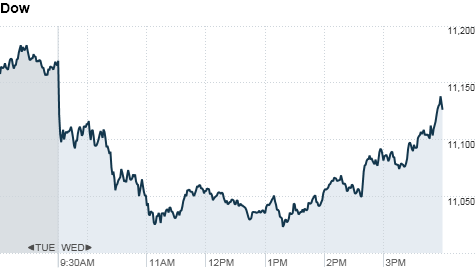 NEW YORK (CNNMoney.com) -- Stocks closed mixed Wednesday, with technology shares posting small gains, as investors lowered their expectations for an aggressive move by the Federal Reserve to stimulate the economy.

Stocks had been climbing for weeks on speculation that the U.S. central bank will announce another round of asset purchases at the end of its next policy meeting on November 3. But investors said the market may have over estimated the size and timing of the expected policy, known as quantitative easing.

"The headlines today are that the Fed's effort to rescue the economy may not be the shock-and-awe campaign many had expected," said Mark Luschini, chief investment strategist at Janney Montgomery Scott. "That's taking some of the fun out of the market."

Luschini said investors are now expecting the Fed to take a more "measured approach" to quantitative easing. "We're likely to see the Fed doing it in a stair step fashion to see if it's getting traction," he said.

The change in sentiment came after a report in the Wall Street Journal said the Fed is likely to buy "a few hundred billion" worth of Treasuries over a period of "several months." Market participants had been expecting the Fed to announce plans to buy an additional $500 billion to $1 trillion worth of Treasuries.

In addition, Bill Gross of PIMCO, the largest U.S. bond fund, wrote in his most recent outlook that he thinks the Fed is setting the stage for a future bout of inflation.

But the toned down expectations helped support the U.S. dollar, which gained ground against the euro, pound and yen. The stronger buck weighed on commodities priced in the U.S. currency. Oil futures fell 0.7%, while gold futures lost over 1%.

But the technology sector was generally stronger, driven by gains in shares of semiconductor companies such as Broadcom.

Shares of some big banks, which had been beaten down recently, were also higher. Bank of America (BAC, Fortune 500) gained 2% and JPMorgan (JPM, Fortune 500) edged up nearly 1%.

After the market closed, Visa (V, Fortune 500) said fiscal fourth-quarter profits rose 51% over last year on strong sales performance across all business lines. But shares of the credit card provider fell 1.5% in after hours trading.

Meanwhile, investors largely shrugged off economic reports on durable goods orders and new home sales in September. But traders said there was some trepidation ahead of next week's midterm elections to determine which political party will control of Congress.

Companies: Shares of Sprint (S, Fortune 500) fell nearly 10% after the company reported a loss of 30 cents per share, which the company said was caused by a massive tax-related charge.

Results from Procter & Gamble beat expectations by 2 cents, posting earnings per share of $1.02. The company reported growth in all geographic regions, with their shippment volumes rising 8%. Shares rose 0.2%.

Tech infrastructure firm CommScope (CTV) announced that it has reached an agreement to be purchased by asset manager The Carlyle Group, in a transaction valued at about $3.9 billion.

The New York Post reported that Google (GOOG, Fortune 500) is close to striking a $2 billion deal for a building in Manhattan that occupies an entire city block. Google currently rents office space in the building.

Economy: The Commerce Department said new orders for manufactured durable goods in September increased $6.3 billion or 3.3%, after falling 1.3% in August.

Economists surveyed by Briefing.com had expected an increase of 1.8%. However, orders excluding transportation were down 0.8%, which was worse than expected.

Currencies and commodities: The dollar continued to strengthen against the euro, the British pound and the Japanese yen.

The drop in oil prices followed a U.S. Geological Survey report that showed revised estimate for the amount of conventional, undiscovered oil in the National Petroleum Reserve in Alaska. The agency said untapped oil reserves are about 90% less than previously estimated.

Bonds: Prices on U.S. Treasuries fell, pushing yields higher. The benchmark 10-year note yield rose to 2.7% from 2.64% late Tuesday. The government is expected to auction off $35 billion of 5-year notes on Wednesday.