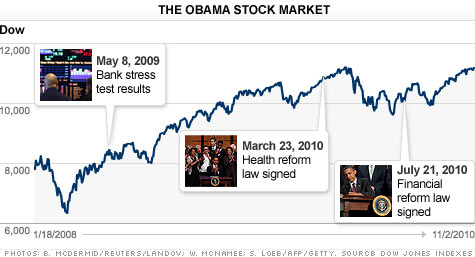 NEW YORK (CNNMoney.com) -- U.S. stocks seesawed Wednesday amid a widely-anticipated Republican victory and the Federal Reserve's announcement of a second round of economy-boosting asset purchases, but managed to end the session with modest gains, pushing the Dow and Nasdaq to their highest levels in over two years.

The Fed said it will buy$600 billion in long-term Treasuries by the middle of next year, at the pace of $75 billion a month.

The three major indexes drifted between negative and positive territory immediately following the announcement, but posted slight gains toward the end of the session.

The Fed policy, known as quantitative easing, is designed to put downward pressure on interest rates and pump money into the economy. It is also seen as a way for the Fed to combat deflation, a debilitating cycle of falling prices and demand.

Market participants and economists expected the Fed would buy a total between $500 billion and $1 trillion.

While the central bank cleared the low end of estimates, that may not be enough for Wall Street.

"The market was hoping for something a little more dramatic from the Fed to ensure a more robust economic growth outlook," said Jeff Kleintop, chief market strategist for LPL Financial. "I don't think the Fed exceeded expectations enough to prompt investors who have been waiting on the sidelines to step back into the market today."

The S&P has climbed more than 12% since late August on expectations of another round of stimulus from the Federal Reserve. Most of the advance was logged in September, and stocks have been rangebound for the past few weeks.

Though the market reaction to the Fed's measures was muted, Kleintop said the October jobs report, the last of three major events this week, could provide investors with more clarity to drive the market's next big move. The Labor Department reports the figures Friday ahead of the market's open.

At the conclusion of its two-day meeting Wednesday, the Fed also announced it will reinvest an additional $250 billion to $300 billion in Treasuries with the proceeds of its earlier investments. The central bank kept the federal funds rate, a benchmark for interest rates on a variety of consumer and business loans, at historic lows near zero.

But the political upside was already priced into the market, and stocks drifted into the red as investors displayed caution ahead of the Fed's announcement.

As expected, the midterm elections resulted in big gains for the Republican party, which won control of the House by capturing at least 60 seats.

The shifting balance of power on Capitol Hill is largely seen as a positive for Wall Street, since Republican lawmakers are viewed as more business friendly and fiscally conservative than their Democratic rivals.

Traders also paid close attention to President Obama's remarks Wednesday afternoon, for hints as to how he will navigate the new political landscape. Kenny Landgraf, principal and founder at Kenjol Capital Management, said investors needed the president to suggest that he is ready to change course.

Obama added that he takes responsibility for the fact that Americans across the country are frustrated with the pace of the economic recovery, and hope lawmakers will be able to find common ground in order to make progress.

Stocks closed higher Tuesday, after interest rate hikes from the central banks of Australia and India sparked an early rally.

World markets: European stocks ended their session lower on news of the election results, and in anticipation of the Fed's next move. Britain's FTSE 100 lost 0.15%, and the DAX in Germany and France's CAC 40 fell 0.6%.

Currencies and commodities: The dollar fell against the euro and the British pound following the Fed announcement -- which could weaken the greenback further. The greenback gained against the Japanese yen.

Bonds: The price on the benchmark 10-year U.S. Treasury fell after the Fed announcement, pushing the yield up to 2.60% from 2.59% late Tuesday.

Economy: In addition to the Fed announcement, investors also took in economic reports on the job market, activity in the services sector and factory orders.

A report from Automatic Data Processing, which manages payrolls for 500,000 companies, showed that private-sector employers added 43,000 jobs in October -- rebounding from a modest decline in the prior month.

In a separate report, employers announced 37,986 job cuts last month -- up 2.2% from September -- according to outplacement firm Challenger, Gray & Christmas. But the October number was still well below the year-ago level.

The Institute for Supply Management's services index jumped to 54.3 in October, from 53.2 the previous month. Analysts were expecting the service sector to expand at a more modest pace, with the index rising to 53.4.

A government report showed that factory orders improved 2.1% in September. Analysts were expecting orders to tick up 1.7%.

AOL (AOL) reported a decline in revenue for the third quarter that exceeded analysts' expectations. The stock gained 3.2%.

Garmin (GRMN) missed estimates thanks to slow sales and cut its forecast for the year. Shares sank 5.3%, and was the biggest loser on the Nasdaq.

Health insurer WellPoint (WLP, Fortune 500) posted a third-quarter profit that beat expectations and raised its outlook for the year. Shares of WellPoint were up 0.5%.

Hartford Financial Services (HIG, Fortune 500) returned to profit during the third quarter from a year-ago loss, and raised its outlook for the remainder of the year. The stock jumped 9.2% and was the biggest gainer on the S&P 500.

Meanwhile, GM said it plans to sell up about $13 billion in common and preferred shares as part of its initial public offering, one of the largest in U.S. history.

Voters have their say on taxes