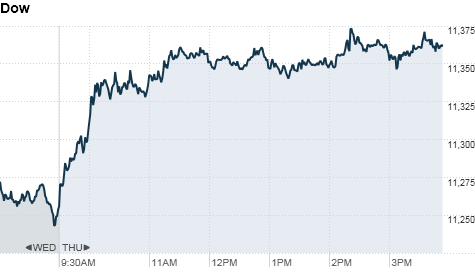 "This continues the trend we've been seeing in the past couple months of retail sales being better than expected," said Ryan Detrick, senior technical strategist Schaeffer's Investment Research. "It's a very positive signal that consumers are coming back and confidence is coming back with them."

That momentum continued Thursday after the ECB announced it will continue its stimulus measures and will keep buying government bonds.

"The [announcement] was largely expected, but there's a bit of relief in the market that they aren't withdrawing liquidity," said Ryan Atkinson, vice president at Balestra Capital. "There's a feeling that the monetary authorities can support the [debt] issue, and for the time being that's all investors need."

Recently, investors have worried that Spain will be the next domino to fall in Europe. But Spain does not intend to tap the European Union fund, Spanish Prime Minister Jose Luis Rodriguez Zapatero said in a CNBC interview Thursday morning.

After the start of trading, the National Association of Realtors said its pending home sales index surged 10.4% in October after slipping 1.8% in September. The index, which measures sales contracts for existing homes, was expected to be unchanged.

"Economic data is looking better all around," said Atkinson. "Data has continued to beat expectations over the past few weeks, so investors are staying hopeful that the economy will continue to grow."

Are jobs coming back? Signs point to yes

The upbeat housing report overshadowed a slightly worse than expected report on jobless claims. The government reported that the number of Americans filing for first-time unemployment rose to 436,000 last week, while economists polled by Briefing.com had expected 422,000 new claims.

A big week for jobs data culminates with the government's key monthly jobs report due before the opening bell on Friday: Employers are expected to have added 130,000 jobs in November after adding 151,000 jobs in October. The unemployment rate is expected to remain unchanged at 9.6%.

Investors were also looking at reports from top retailers on their November same-store sales, which will give a taste of the holiday shopping season ahead. Discount food shopping giant Costco (COST, Fortune 500) announced that its sales were up 9% year over year. Clothing brand Abercrombie & Fitch (ANF) reported sales were up 22%, and Macy's (M, Fortune 500) showed an increase of 6.1%. Same-store sales measure sales at stores open at least a year.

Currencies and commodities: The dollar rose against the euro and the British pound, but slipped versus the Japanese yen.

Why your shareholder vote may not count

Is the commodities correction finally over?
First Published: December 2, 2010: 9:47 AM ET