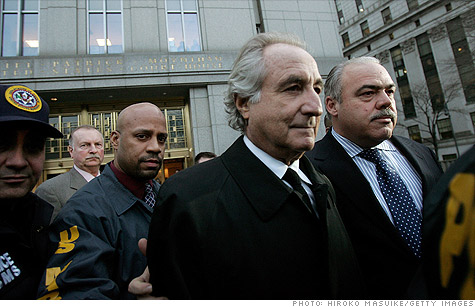 NEW YORK (CNNMoney.com) -- Madoff victims might finally get their hands on their stolen billions.

The court-appointed trustee trying to recover Madoff's loot has brought dozens of lawsuits but so far hasn't been able to compensate victims. That might soon change. A court hearing is set for Jan. 13 that could unlock more than one-third of the $20 billion in stolen money.

There are two ways in which victims are being compensated. One is through the recovery of stolen assets and the other is through an industry-sponsored insurance organization called the Securities Investor Protection Corp.

Many victims have already been paid through SIPC.

But the bulk of the victims' losses must be recovered from Madoff's massive Ponzi scheme, which came crashing down with his arrest on Dec. 11, 2008.

Unlocking the money: The ongoing quest for Madoff's money will hit a milestone in mid-January, when the trustee in the recovery of the Ponzi schemer's assets appears before a U.S. Bankruptcy Court judge in New York.

That judge will decide whether to approve the $7.2 billion settlement agreement reached with Barbara Picower, the widow of philanthropist Jeffry Picower. If the settlement is approved, the trustee Irving Picard will motion to allocate funds to Madoff's victims.

Picower, who died of a heart attack last year, was one of the greatest beneficiaries of Madoff's scheme, according to investigators. He withdrew $7.8 billion from Madoff's investment firm over a period of decades starting in the 1970s, even though he only deposited $619 million, according to the trustee. His widow agreed to hand over the difference to federal authorities.

Picard said that he hopes to begin distributing the funds -- the largest forfeiture settlement in U.S. history -- to victims in early 2011. The Picower settlement alone represents more than a third of the total assets stolen in the most massive Ponzi scheme in history.

The trustee has filed Lawsuits against Madoff's family members and anyone who may have profited, knowingly or not, from the scheme to recover funds.

Altogether, 16,440 investors claimed to have been ripped-off by Madoff. The trustee has rejected more than 80% of these claims. Most of these victims were denied because they invested in feeder funds, which means that they have no protection under the rules of SIPC. The only recourse for these investors is to go after their feeder funds.

Some of the other investors were rejected because, like Picower, their withdrawals from Madoff's firm exceeded their deposits. The trustee has sued about 400 of these investors, even though many of them insist they had no idea they were participating in a Ponzi scheme.

Millionaires who lost it all: Some of these investors used Madoff's firm as a type of bank account, withdrawing money to live off over the years. When the firm went bust, they lost whatever they thought was in the account. The trustee is allowing them to apply for "hardship" exemptions, on a case by case basis.

The trustee has acknowledged 2,365 claimants as legitimate, with total losses of more than $5.9 billion. He is trying to determine the status of several hundred more. It's unclear how or when the $7.2 billion settlement, if approved, will be distributed.

The legitimate claimants have already received more than $700 million, or are in the process of receiving, insurance payments from SIPC.

But that still leaves more than $5.1 billion in trustee-recognized losses unaccounted for, not to mention the additional billions that has yet to be recovered by Picard.

When Picard unveiled the Picower settlement on Dec. 17, he said, "We will seek to distribute these proceeds as quickly as possible. Every penny of this $7.2 billion settlement will be distributed to [Madoff] customers with valid claims."

The victims: Stephanie Halio, a former Madoff investor who lives in Boca Raton, Fl. with her husband, said they were wiped out by the Ponzi scheme and she's hoping that some of their money will be returned.

"We can get some money back but we don't know how much and we don't know when," she said. "I don't think we'll get all the money we lost."

Halio, 67, came out of retirement as a real estate agent because the scheme left them with "virtually nothing." She said they were partially reimbursed by SIPC, but she would not provide specifics about her personal finances.

"It's impossibly painful and terrifying and nerve-wracking because you're trying to figure out how to live the rest of your life on nothing or very little."

Madoff is currently serving a 150-year sentence in a medium security federal prison in Butner, N.C. He pleaded guilty in March, 2009 to orchestrating the most massive, long-running Ponzi scheme ever.

Eventually, the funds dried up and his scam collapsed amid the market meltdown, wiping out investors like Allan Goldstein, a 78-year-old Korean War veteran who lives in Massachusetts with his wife.

Goldstein said he received $320,000 from SIPC about six months ago and that's all he's entitled to get, even though Madoff told them they were worth $4.5 million.

Like other investors, Goldstein said he's angry that the Securities and Exchange Commission failed to catch on to Madoff for so many years.

"When I met Bernie Madoff [years before his arrest], I asked him a lot of questions," said Goldstein. "His answer to me was, 'You don't have to ask me any questions. The SEC's been here a hundred times. We're properly accredited. Check us out."