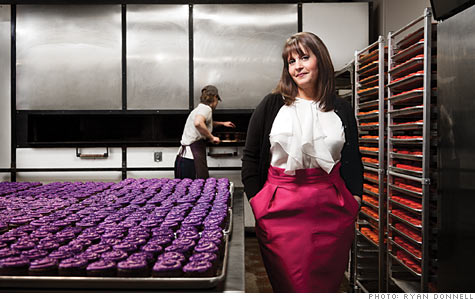 Around 2008 she noticed cupcake shops popping up on the coasts and wondered about bringing the concept home to the Detroit area.

Not only was her husband, Todd, recently out of work, but her employer was pressuring her to move to its Florida office.

"I baked for fun, so I started experimenting," says Turkin. She spent weekends devising flavors like S'mores and Fat Elvis (banana cake with peanut butter buttercream, dipped in chocolate), using her five kids as testers.

By late 2008 she'd rented a commercial kitchen and had placed her pastries in a dozen stores. Early the next year, she quit her day job to open a retail shop. In 2010, Just Baked opened its fifth store, and turned its first profit on $1.6 million in sales.

10 lucky people who love their jobs

"The business has never slowed down," says Turkin, who has 40 full-time employees -- including Todd, who is manager of operations -- and 25 part-timers. "It's a lot of fun, and more than a little crazy."

How she's doing it:

With business lending tight, Turkin figured she wouldn't get a loan. So, after using $10,000 from her mom to start up, she put early revenue to use. "If we had a big weekend, we bought a mixer," she says.

3. By growing on the cheap

The Turkins recently began licensing their brand. They own just 20% of their fifth store. Plus, a new deal with Faygo, which is distributing soda-flavored cupcakes, could double sales.