What's so great about working at Goldman? 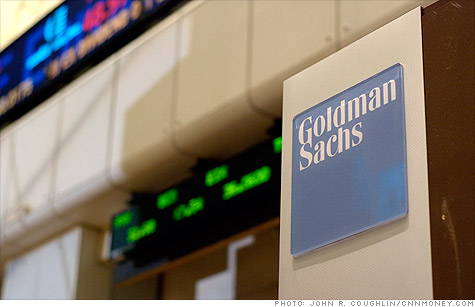 FORTUNE -- The past 12 months have undoubtedly had Goldman Sachs (GS, Fortune 500) wishing for an invisibility cloak. The bank was sued by the SEC for trading activities, vilified by Congress, and its bonus figures became a lightning rod for Main Street criticism. And that was just 2010 -- already this year it's been lambasted for its bungled Facebook share offering.

Yet Goldman employees can't seem to get enough of working there. The company is a fixture of Fortune's 100 Best Companies to Work For list -- this year, it moved up a slot to No. 23. While that's lower than its 9th place ranking before the financial crisis, Goldman is one of only 13 companies to have earned a spot on the list every year since it debuted in 1998.

Even more interesting, if you were to assume the reason for its ranking is simple -- that it's the money that makes its people happy -- you'd be wrong. Other Wall Street banks may want to listen up: no matter how bad the news surrounding Goldman gets, it keeps attracting the best and brightest not because of outsize pay or perks, according to 20 pages of unfiltered comments from Goldman employees, but because they like the culture.

Each trader may have his own profit-loss tally. And partners may fight for their group's compensation. But from the bottom to the top, employees said in the comments submitted for the Best Companies survey that Goldman feels like a family -- often getting defensive about any assumptions otherwise. "People on the outside are not aware of the feeling," wrote one employee. "The sense of family and belonging that comes from working here is like none other," said another. (Employee opinion is the biggest driver of a company's ranking on the Best Companies list: workers on all levels are surveyed, from secretaries to executives.)

In fact, employees urged management to fight back against the criticism from the public and from the media. A common theme throughout the employee comments was why Goldman was taking a beating in the press without returning fire. "I think we need to have a more robust public and media relations campaign, in order to stave off the uninformed/misinformed press," wrote one employee. Urged another: "Take a PR campaign out to Main St." (Goldman did, unleashing a massive advertising push last fall in newspapers and magazines to emphasize its part in U.S. job creation and other positive news.)

Collegial culture, but not so fun

But for the most part, Robert Levering, cofounder of the Great Place to Work Institute, which compiles the survey, says Goldman employees took outsiders' criticism in stride. "We were very curious whether over the last two years there would be noticeable drop in morale," he says. "And there definitely wasn't."

When you drill down a little deeper into Goldman's results, it's easy to see where the firm outperforms. For example, Goldman scored nine points higher than the 100 Best Companies average score for the statement, "Management hires people who fit in well here." Pride runs deep, too: The company again scored nine points higher than the list average for the statement, "People here are willing to give extra to get the job done." And its workers feel empowered and trusted: Responses to the statement, "People here are given a lot of responsibility," scored six points above the average.

Goldman engrains its culture from the start: recruits go through a grueling hiring process, which includes upwards of eight interviews. And while that's not overwhelmingly different from other banks, Goldman scores big points for what it does after sending recruits through the ringer. For three months, new hires get training and welcoming materials. "It's a company that has managed to develop this very collegial culture that people really like," says Levering.

Picking apart Goldman's employee survey helps dismiss some other assumptions about great workplaces. Goldman, for instance, doesn't offer employees free cafeteria chow like Google (GOOG, Fortune 500). Nor does it provide complimentary recreation and fitness areas like the No. 1 company on the list, SAS. Even Goldman's compensation, though higher than many companies, isn't dramatically different from other investment banks. (As one former low-level Goldman strategist puts it, "Their compensation system pays you $1 more than whatever is your threshold for leaving Goldman Sachs.")

To be fair, Goldman did earn kudos for its gleaming new headquarters in downtown Manhattan. Several employees wrote about the new $2 billion structure overlooking New York's Hudson River, replete with a natural-light filled 11th floor Sky Lobby and a barista-staffed café. But for the most part, Goldman's supportive, driven atmosphere is what makes up for a lack of tangible perks, employees say.

Not that employees don't have their complaints. Chief among them: Goldman isn't exactly fun. Its responses to the question "this is a fun place to work" rank 11 points below the average. Goldman's layoff and firing record is even worse, with employees grading it 15 points below the average to the statement, "I believe management would lay people off only as a last resort." That's no surprise, given the company usually fires the bottom 5% of workers in an exhaustive 360-degree annual review.

Lastly, if you want a job at Goldman you'd better be ready to give up your life. Employee responses to questions asking whether Goldman allows employees to preserve a work/life balance rank the worst out of the survey's 58 questions. Perhaps that's not surprising in the do-as-we-do culture of Goldman, where CEO Lloyd Blankfein himself is said to enjoy few outside interests.

Just goes to show you, the great place to work isn't for everybody.

15 companies with no layoffs -- ever!