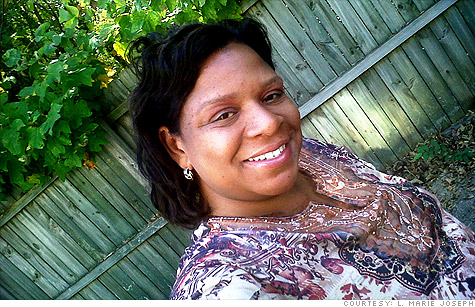 L. Marie Joseph lives in Atlanta, Ga., and writes the Moneymonk.net blog. She also recently published her book, First Generation White Collar, a practical guide for getting ahead and not just getting by with your money.

I'm the first in my family to graduate from college. It was a big honor, but it was also scary. I had a college degree, and I knew that should get me a good job and a good life. But I didn't have the experience, guidance or confidence to know how to make that happen -- or how to manage the financial windfall that would surely come.

Growing up, my dad worked as a longshoreman and my mom was a homemaker. They had seven children and lived on one salary. My dad worked hard, paid the bills and saved whatever was left. If a crisis came, he worked extra hours.

My mom introduced me to a checking/savings account when I got my first job in high school. But because my dad handled all the finances, she couldn't teach me how much to save or how to choose a bank. She would just say pay yourself first. That was the extent of my personal finance education.

So once I graduated from college and receive a job offer -- a nice cushy white-collar desk job with a well known company! -- I took my paychecks and did the only thing I knew to do with money: spend it.

Every week I was at the mall, spending most of my check on clothes, gadgets and shoes. I was looking good, and spending massively.

After all, I'd never had a white-collar job like this -- one where I had my own computer, nameplate and phone extension -- and I wanted to blend in. Dressing up everyday in nice clothes made me feel like an executive, like I belonged. Lifestyle inflation crept in.

Everyone had a nice car and would talk about going to the theater and their home remodels. All I had was a one bedroom apartment and a Corolla. Their parents all went to college. I, of course, was the first to graduate. They all knew what mutual funds to invest in. I invested 3% into my 401(k) and had no idea what funds I owned.

But I figured I was doing well. I was paying my bills, had retirement savings and was having fun. And as far as a rainy day fund...I had my dad!

He was so proud of me that he didn't mind me asking for money. He was collecting a pension, the house was paid off and the bills were low, so he could afford to help.

But it eventually dawned on me: I was making more money than my parents combined and I was asking my dad for money. Despite the degree and swanky job, my parents were richer than me. When you are asking to borrow money from someone who makes less than you, you are the poor one.

By my late twenties, I realized I had nothing to show for my life but multiple pages of debt on my credit report. I was not credit-worthy for purchasing a house or having children.

And then I met my husband. He was an electrician and made less money than I did, but had more in savings. I was slightly embarrassed. I knew I had to change.

First I decided to save 2% of my income, and steadily bumped that up to 10% over the course of year. Still, I would save the money and then withdraw it a few days later. So I stopped buying expensive shoes. But I still found myself withdrawing my savings just to make it until payday. So I decided to avoid the mall all together. Target became my best friend.

Fear of debt: Do I finance my dream?

As I got that under control, I was able to pay down my student loans and pay off my credit card. I also increased my 401(k) contributions by 1% a month, until, after two years, I was saving 20% of my salary. By doing it in small monthly increases, it didn't hurt as much.

I set my savings to automatically withdraw and just pretend I had a pay cut. I now have 30% of my paycheck (10% savings and 20% retirement) going to myself instead of stuff.

In exchange, I'm wearing lower price shoes and clothes. It's not a bad trade. And it became easier once I got over the material things in life. The main hurdle was getting over what people thought.

But I made them and recovered. By the age of 32, I had a cash cushion, a healthy retirement fund and was no longer deep in debt. I felt like a responsible adult. All it took was changing my relationship with money.

I am no longer just getting by with money, I am getting ahead.