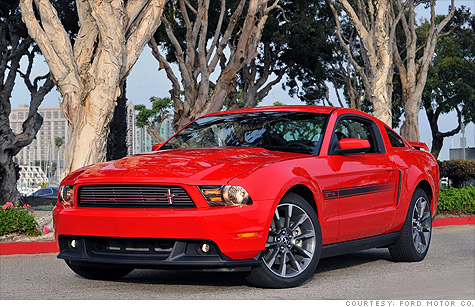 The Ford Mustang, including both V6 and V8-powered versions, was Consumer Reports' "Top Pick" in the Sporty Car catergory, only the second American car ever to earn that title. By Peter Valdes-Dapena, senior writerFebruary 28, 2011: 2:39 PM ET
Follow Peter on Twitter: @PeterDrives

Not that the Mustang isn't a good car -- it's been a hit with car critics -- it's just not the type of car normally associated with the not-for-profit consumer advice magazine, famous for its focus on no-nonsense practicality

This is only the second time an American Car has won in the Sporty car category. The last time was when the Ford Focus SVT won in 2004. The magazine has been rating cars since the 1950s but has only been compiling "Top Picks" lists since 1997.

In the past, the Mustang has been famous for its straight-line acceleration, which is still strong, but now it also handles well in the curves and can stop quickly and surely.

With back seats and decent trunk space, it's also a pretty practical choice, said Paul, calling the Mustang "a reasonable daily driver."

The Mustang is offered with a choice of two new engines for the 2011 model year, a 412-horsepower 5.0-liter V8 or a 305 horsepower 3.7-liter V6. Ford also changed both the manual and automatic transmissions for 2011 and made some changes to improve the car's steering and suspension.

Fuel economy -- again, not an American traditional muscle car strong point -- was also a factor in the scoring, said Paul

The Mustang's V6 engine gets 24 miles per gallon in overall driving in Consumer Reports testing when paired with a six-speed manual transmission and it still offers exciting performance, according to the magazine. (The EPA rates the V6 Mustang at 23 mpg overall, and 31 mpg on the highway.)

The V8-equipped Mustang GT gets points for its snarling exhaust sound as well as its "scorching acceleration," the magazine said.

The magazine did criticize the Mustang for its hard-to-get-into back seats and the trunk's small opening.

American cars have generally had a tough time breaking into the top ranks with Consumer Reports car testers.

This year, the Mustang was one of only two American models to top any of of the Consumer Reports' 10 categories. The other winner was a pick-up truck. American automakers face relatively little foreign competition in that category.

Other categories included "Small car," won by the Hyundai Elantra, "Family Sedan," where the Nissan Altima was the winner, and "Green Car," won by the Toyota Prius.