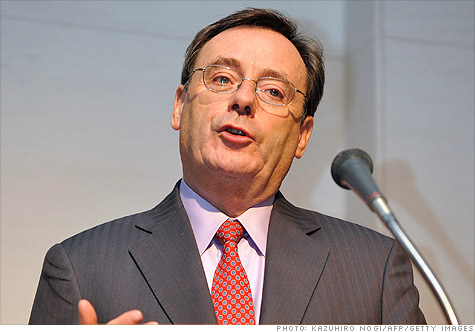 NEW YORK (CNNMoney) -- The head of industrial conglomerate 3M (MMM, Fortune 500) blasted the president as being "anti-business," claiming Obama has not done anything to improve the White House's relationship with Corporate America.

3M CEO George Buckley called Obama's policies "Robin Hood-esque" and told the Financial Times that manufacturers like 3M may have to shift production to other countries in order to stay competitive.

"We know what his instincts are ... he is anti business," Buckley said in an interview that ran late Sunday.

The interview comes as the White House pushes its pro-business agenda. Last week, the Council on Jobs and Competitiveness held its first meeting to brainstorm ideas on job growth and boosting the economy.

Otellini had been critical of the Obama administration's handling of the economic recovery back in September. But he joined 19 other CEOs for a White House summit in December to talk about job creation and other ways to move the economy forward.

Buckley said his company, which makes thousands of products ranging from Post-It notes to Scotch Tape, "will do business where it's good and friendly."

Despite the recent public positions of other major business leaders, Buckley says he's not alone.

"There is a sense among companies that [the U.S.] is a difficult place to do business," he told the FT. "We've got a real choice between manufacturing in Canada or Mexico -- which tend to be more pro-business -- and America."