Madoff victims fire back: 'The man is a monster' 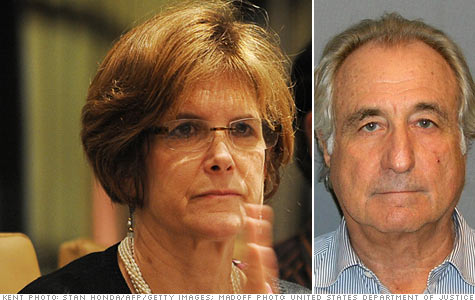 Ilene Kent, a victims' advocate whose parents lost the bulk of their life savings to Madoff, calls the Ponzi schemer a "pathological liar." By Aaron Smith, staff writerFebruary 28, 2011: 9:09 PM ET

NEW YORK (CNNMoney) -- Victims of Bernard Madoff's Ponzi scheme are infuriated with his latest jailhouse interview, in which he blames his victims for being "greedy."

"The man is a monster, a liar, a thief with absolutely no morals, no regrets, no shame," said Stephanie Halio, whose retirement fund was wiped out by Madoff's scheme. "And he portrays his victims as greedy?"

Halio, 67, says that she and her 70-year-old husband have been forced to abandon retirement and go back to work since Madoff was discovered in 2008.

"He is psychologically transferring his greed to the victims," Halio said. "He lied through his teeth to the entire world. He bankrupted entire generations of families. He bankrupted charities. It was totally perverted."

In an interview with New York Magazine, Madoff placed some of the blame of his long-running pyramid-style scheme squarely on the shoulders of the people he ripped off, saying they should have had "doubts" about the double-digit returns they received from his firm.

"I don't want to be lectured by Bernie Madoff about people being greedy," said Ilene Kent, a victims' advocate whose parents lost 70% of their life savings to Madoff.

"He's obviously a pathological liar," Kent said. "How can you believe a man who pulled off the largest financial crime in the history of the world? He only cares about himself and making himself look good, deflecting the blame."

When Madoff's scam finally collapsed with his arrest on Dec. 11, 2008, it became obvious that his returns were fraudulent and that he was not actually investing the money he received from investors.

To keep his scam going, Madoff would pay off longer-standing investors with money taken from fresh investors, and fraudulently present these payments as legitimate returns from Wall Street investments.

Meanwhile, Madoff lived an affluent lifestyle. He owned homes in Manhattan, Florida and France, along with a yacht and diamond-encrusted jewelry for him and his wife, Ruth.

Madoff pleaded guilty in March 2009 to orchestrating the largest, most sweeping Ponzi scheme in history and bilking thousands of investors out of an estimated $20 billion.

The court-appointed trustee cleaning up after Madoff has recognized 2,404 investors as eligible victims for about $6.8 billion in recovered assets, but more than 16,000 investors have filed claims.

Like other burned investors, Mike De Vita, who lost his retirement savings to Madoff's scam, said he took umbrage with Madoff's claim that investors should have had "doubts" about returns ranging from 15% to 18%. He said that most investors did not receive returns that were anywhere near that high, and therefore had no reason to be suspicious of implausible finances.

De Vita said that his own returns averaged 10.5% over 18 years, peaking as high as 13% in one year, and dropping as low as 8% in another. He said that Madoff is painting an inaccurate and unsympathetic picture of the victims.

Meanwhile, Madoff is serving a 150-year sentence in a federal prison in Butner, N.C., where he told the magazine that his "notoriety impresses" the other prisoners. But De Vita suspects that isn't enough attention for Madoff.

"He's got an ego that can't be fed adequately inside the prison walls," said De Vita.

Madoff says his victims were "greedy"