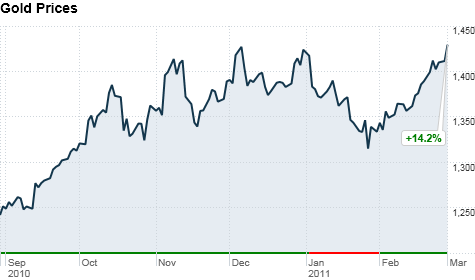 NEW YORK (CNNMoney) -- Gold prices settled at a new record high on Tuesday, as unrest in North Africa and the Middle East pushed the safe-haven commodity north of $1,430.

Investors rushed to gold as unrest in the key oil producing state of Libya continued to rage, and reports from Iran indicated large numbers of protestors were in the streets.

That unrest was contributing to a "fear factor" that was driving gold higher, according to Thomas Winmill, portfolio manager of the Midas Fund.

But he also said fears of rising inflation rates have played a role in gold's ascent. Gold is often viewed as a classic hedge against inflation because it's a tangible asset, unlike a paper currency

On Tuesday, investors keyed in on Fed Chairman Ben Bernanke's testimony on Capitol Hill, where the central bank chief walked a fine line on inflation.