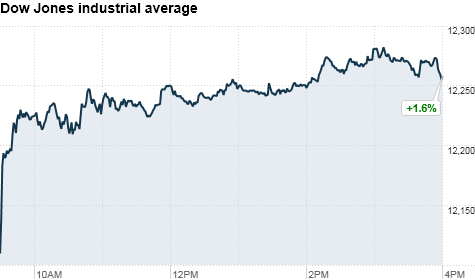 NEW YORK (CNNMoney) -- U.S. stocks posted their best day in three months on Thursday as Wall Street rallied behind a strong unemployment claims report along with a modest drop in energy prices.

Thursday's rally was fairly broadbased and held steady the entire day. Twenty of the Dow's 30 members advanced more than 1%, while the worst-performing member of the Dow was AT&T (T, Fortune 500), falling a modest 0.1%.

Wall Street's bulls rallied behind a considerably better-than-expected weekly jobless claims report, which showed the number of people who filed for benefits dropping to its lowest level since May 2008, along with a modest cooling in energy prices.

"This has been a very headline-driven market in recent weeks, the oil market especially," Dickson said.

Economy: The Labor Department reported that initial jobless claims totaled 368,000 in the week ended Feb. 26 -- the lowest weekly figure since May 31, 2008.

Analysts surveyed by Briefing.com had expected the number of people filing for unemployment benefits to rise to 400,000 from the revised tally of 388,000 the previous week.

The report came a day before the big labor report, the monthly employment figures from the government. Economists surveyed by CNNMoney expect that 192,000 jobs were created in February, with the unemployment rate rising to 9.1% from 9% in January.

The Institute for Supply Management's service industries index was also a positive force for the markets, rising to a stronger-than-expected reading of 59.7 for February. Economists had been looking for a reading of 59. Any reading above 50 signals expansion in the sector.

Companies: Valero Energy (VLO, Fortune 500) was the best-performing stock in the S&P 500 on Thursday, jumping 7.7%, after the oil refining company said it expects to post adjusted earnings between 76 cents and 91 cents a share, well ahead of the 48 cents a share analysts had forecast.

Currencies and commodities: The dollar rose versus the British pound, and made slight gains against the Japanese yen and the euro.