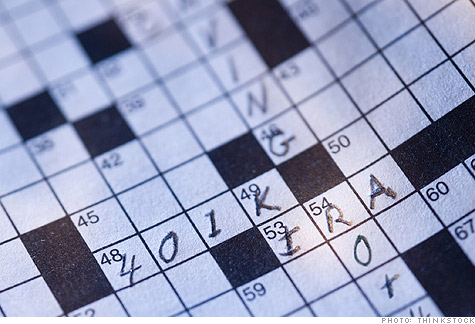 Here are the answers to the most common questions about IRAs.

You'll need to report that conversion on your 2010 return no matter what. The question is when to pay the tax bill, and the most likely answer is to wait.

With income limits lifted on Roth conversions last year, many high-income investors grabbed the chance to lock in tax-free withdrawals in retirement.

For most, waiting is better. Tax rates are locked in for the next two years, so the only reason to pay the tax right away is if you expect that your income will rise enough in 2011 and 2012 to push you into a higher tax bracket.

Yes, you're onto something.

Typically you want to convert a traditional IRA to a Roth if you believe your taxes will be higher in retirement or you're decades from needing the cash. But a Roth is also a smart tool for passing on wealth.

You're not required to take distributions (as you are with a traditional IRA). And once you pay the tax on the conversion, you'll never have to pay income taxes again, nor will the children, grandchildren, or any others who inherit.

Says Greg Singer, director of research at Bernstein Global Wealth Management: "There's no better way to pass money on to the next generation."

The biggest stumbling block is today's tax bill -- a conversion is worthwhile only if you can pay those taxes from outside savings.

As you can see from the modified AGI cutoffs, you should have no problem funding a Roth if you put the full $16,500 in your 401(k).

For higher earners, the elimination of income limits on conversions makes it easier to fund a Roth -- in addition to converting existing IRAs, you can open a nondeductible IRA now and convert immediately.