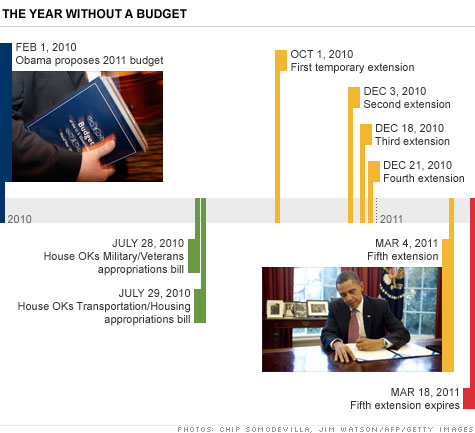 NEW YORK (CNNMoney) -- The fiscal year is 162 days old, and the federal government is still operating without a budget. And it doesn't look like one will be arriving anytime soon.

Instead, lawmakers have passed five short-term spending bills. With their next deadline, March 18 bearing down, the two parties remain miles apart on spending cuts. (Update: Yippee! Another short-term plan)

As school kids know, Congress has the responsibility to appropriate funds for the government to spend. It's right there in Article 1 of the Constitution. But this year -- and let's not mince words -- lawmakers have fallen down on the job.

"This is a measure that indicates they [lawmakers] are not doing well," said Julian Zelizer, a professor of history and public affairs at Princeton University. "Polarization in Congress is so extreme, and this reflects the difficulty lawmakers face in making decisions."

Of course, short-term spending bills are nothing new. Congress has enacted at least one every year for all but three of the past 30. But five in one year? How did it come to this?

Here's what Congress did manage to do: The House produced two of 12 appropriations bills. The Senate has not voted on a single one. Lawmakers couldn't even agree on their own legislative budget.

"Certainly the White House didn't make the budget a priority," Zelizer said. "And there are divisions in the Democratic Party, and especially in the Senate, that are significant. Not everyone is on the same page."

In the absence of a full-year budget, lawmakers have instead passed five short-term spending bills called "continuing resolutions." Designed to bridge short-term gaps in appropriations, Congress has approved one after another to keep the government running. Average length: 34 days.

Continuing resolutions, with the exception of the most recent effort by Congress, freeze spending at the prior year's levels.

As if to call attention to their own failure, both Republicans and Democrats have spent months issuing high-profile calls for a return to responsible budgeting.

Yet they have made no progress.

Republicans want 10 times the budget cuts the White House wants. Last week, the Obama delegated Vice President Joe Biden to meet with the House and Senate leadership. No deal emerged, and Biden has since decamped to Europe.

On Tuesday, lawmakers put on a great show, staging Senate votes on the two competing plans. Both failed, a fate that surprised exactly nobody.

What happens next is largely unclear. One scenario is that lawmakers will pass another continuing resolution before their March 18 deadline. That would be the sixth this year, if you happen to be keeping track.