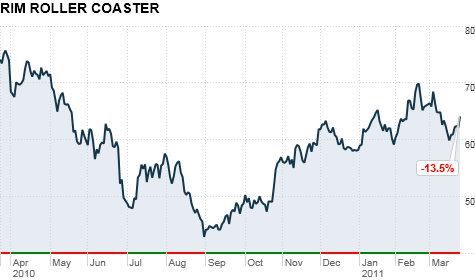 Research in Motion's stock has been all over the map this year. By Laurie Segall, staff reporterMarch 24, 2011: 5:51 PM ET

The company reported a profit of $984 million, or $1.78 per share, edging past the consensus estimate of analysts polled by Thomson Reuters. But its sales of $5.56 billion came in slightly short of forecasts.

RIM (RIMM) shares fell 12% in after-market trading thanks to the company's cautious guidance about its current quarter. Revenue is expected to be in the range of $5.2 billion to $5.6 billion, the company said.

The forecast reflects customers' shift toward RIM's lower-priced products, and RIM's rising sales, marketing and development expenses from its forthcoming push into the tablet market. RIM also warned about a risk of potential supply-chain disruption as a result of Japan's recent earthquake -- a problem plaguing the consumer electronics industry.

The company's closely watched PlayBook tablet will go on sale next month. With prices starting at $499, the new device will go head-to-head against Apple's iPad.

RIM says it's bullish about its prospects.

"As we enter fiscal 2012, RIM is in an excellent position," Jim Balsillie, RIM's co-CEO, said in a prepared statement. "We are extremely excited about our smartphone, tablet and platform roadmaps."

BlackBerry smartphone shipments for the year totaled 52.3 million, up 43% from the previous year.