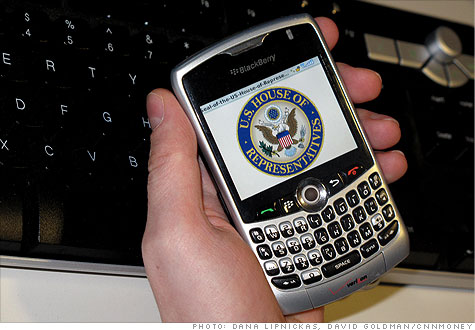 WASHINGTON (CNNMoney) -- What happens when you apply an 1884 law to BlackBerries? Mass confusion.

The Antideficiency Act, passed by Congress during Chester Arthur's administration, prevents non-essential federal employees from working when the government has no budget with which to pay them. If the government were to shut down Friday, the 800,000 furloughed federal employees would actually be violating the law if they were to check their work e-mail.

But in the age of ubiquitous communication, how do you even enforce that? The truth is, no one really knows yet. The last shutdown was in 1995, when the Palm Pilot was about as advanced as handheld devices got.

The Capitol was bustling on Thursday with staffers wondering if they'd have to work all weekend, turn off their BlackBerries or turn in their devices on Monday. Most said they didn't know for sure.

"For the first time, government agencies are trying to figure out how the Antideficiency Act applies to computers and BlackBerry devices," said John Cooney, partner at Venable LLP and former deputy general counsel at the Office of Management and Budget. "It's a difficult problem to solve."

Agencies are taking different steps to address the problem, but none of them are foolproof.

The Department of Housing and Urban Development, for instance, is allowing all 9,700 non-essential employees to keep their government-issued BlackBerries and laptops, but they are prohibited from using them. However, some "excepted" employees may be allowed to carry out "essential functions."

The agency is determining who qualifies as an "excepted" employee. Those staffers may continue to work on a BlackBerry only for essential reasons, according to Melanie Roussell, spokeswoman for HUD. For example, public affairs officers at HUD might be allowed to use their BlackBerries -- but only to answer media questions about furloughs.

Checking and responding to other e-mails would be against the agency's rules. Of course, knowing what e-mails are essential requires reading them.

Other parts of government are dealing with the problem by taking away the devices. The House sent a memo to staffers saying furloughed employees may be required to turn in their BlackBerries, laptops, and even cell phones, instructing them to turn on "out of office" messages.

Employees would have to come back on Monday to return their devices -- even though they're not allowed to work.

In that case, the agencies might invoke a 1981 ruling by Benjamin Civiletti, President Ronald Reagan's attorney general. Civiletti ruled that as long as budget negotiations are ongoing, agencies may allow staff to come back to work on the morning after a shutdown to engage in shutdown-related activities like securing their desks, and, presumably, turning in their BlackBerries.

So what about checking e-mail from home?

HUD told its employees that they are prohibited from checking e-mail on their home computers. The House issued similar guidance -- but it also said offices "may contact employees to notify them to return to work." Getting that message out without e-mail could be tricky. Time for a return of the telephone tree?

In a more extreme measure, government agencies could shut down their e-mail servers, but that would kill e-mail and communications for essential workers as well.

"Agencies are not required to take heroic efforts when the government shuts down for a short period of time," Cooney said. For example, a trade delegation does not need to be flown home, only to fly back abroad if the government were to resume operations a few days later.

"But if it's a long shut down, the agencies might have to block certain users' e-mails at the router or system level," he added.

Many agencies don't have a BlackBerry plan yet. The OMB said it was still trying to determine which employees were "non-essential," and that it will then send a memo around about its BlackBerry strategy. Treasury had yet to decide what to do.

The White House Travel Office said that its employees would not be allowed to use their BlackBerries, but it didn't say whether they could keep them.

The First BlackBerry won't be taken away, however. The E-mailer-in-chief is an essential government employee.