Expert: U.S. should 'give up on the dollar' 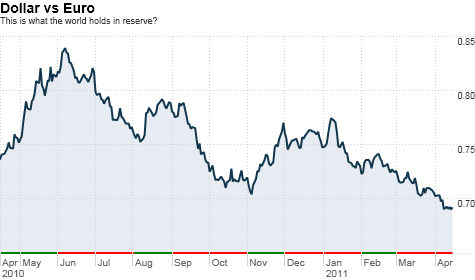 NEW YORK (CNNMoney) -- The push to replace the U.S. dollar as the world's reserve currency has been gaining steam, with one expert arguing that America "must give up on the dollar."

In a Financial Times op-ed, Michael Pettis, a finance professor at Peking University, said U.S. policymakers should lead the charge to create a more diverse reserve system, "in which the dollar is simply first among equals."

The dollar has been the dominant reserve currency for decades, with central banks and other institutions around the world amassing vast reserves.

Pettis argues that this has resulted in dangerous trade imbalances that threaten to destabilize the global economy. He contends that countries such as China have been able to "game the system" by stockpiling dollars, which has allowed them to grab a larger share of global demand for goods and services.

At the same time, the U.S. economy has suffered as money rushes out of the country and into red-hot emerging markets. Pettis said this leaves the United States with a stark choice between further pain in the job market, as demand continues to shift overseas, or adding to already massive deficits to finance domestic growth.

"Americans, in other words, must choose between higher unemployment and higher debt," Pettis wrote.

As such, the United States may eventually need to force the rest of the world to gradually "disengage" from the dollar as a reserve currency if it continues to decline.

The dollar index, which measures the greenback against a basket of currencies, has fallen 5% so far this year to around 74.80. That's down from a high near 87 in June of 2009, as jittery investors flocked to the dollar for safety.

However, there is not an obvious alternative to the dollar.

Pettis suggested that the euro could emerge over the next decade, since no other world currency has "the necessary characteristics to allow it plausibly to serve the needs of the global economy."

But he suggested that European officials would resist taking on the responsibility, since it would saddle the European Union with the same burdens currently facing the United States.

Meanwhile, the International Monetary Fund has proposed a larger role for its special drawing rights, or SDRs, in the global reserve system.

SDRs represent potential claims on the currencies of IMF members. They were created by the IMF in 1969 and can be converted into whatever currency a borrower requires at exchange rates based on a weighted basket of international currencies. The IMF typically lends funds to countries denominated in SDRs.

The global monetary system and the dollar will be discussed this weekend as finance officials from the Group of 20 economies gather in Washington for the spring meetings of the International Monetary Fund and the World Bank.

The dollar found some support Friday as investors turned cautious ahead of possible policy changes stemming from this weekend's summit.

"Today's risk will come from sideline comments from the G20 and IMF meetings as well as the deluge of U.S. data," said Camilla Sutton, chief currency strategist at Scotia Capital.

Investors are also focused on the outlook for global interest rates, as central banks adjust to rising inflation.

In Europe, consumer prices rose 2.7% in March versus last year, according to data released Friday from EuroStat. The European Central Bank hiked interest rates last week for the first time since the 2008 financial crisis.

While many investors and economists expect the Federal Reserve to maintain its low interest rate policy for some time, some central bank officials have been calling for a tighter stance to ward off inflation.

"The biggest risk to a change in the downward US dollar trend is a shift in stance at the Fed," said Sutton. "At some point the Fed will move away from emergency level interest rates and the US dollar will likely rally temporarily."