Who pays for Obama's Medicare plan? Hint: Not seniors 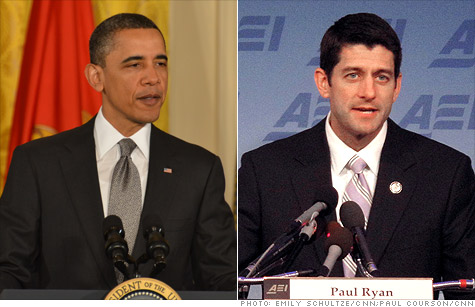 While Ryan's plan would place the burden on those under 55, Obama's Medicare savings plan asks the health care industry to pick up the tab. By Tami Luhby, senior writerApril 15, 2011: 9:59 AM ET

Republican lawmakers would sock it to future generations of senior citizens, most of whom would have to pay more for their medical coverage.

The president would make the health care industry bear the brunt of containing costs.

Obama's proposal, which was unveiled Wednesday as part of a $4 trillion debt reduction plan, would save $340 billion in Medicare costs over 10 years, the president said. Though details of the president's plan remain sketchy, the framework has already rankled many in the health care industry.

Drug companies could see the biggest changes if the plan were to be adopted by Congress, which is a very big "if." The president called for curbing "excessive spending" on medications and reducing the time it takes generic drugs to hit the market. Some in the industry speculate the president may look to expand to certain seniors the drug rebates now available to Medicaid recipients.

The cuts in prescription drug spending would save at least $200 billion over 10 years, according to the White House.

It's no surprise that the pharmaceutical industry association opposes the president's plan, saying it's bad for patients and for innovation.

"Implementing government price controls in the Medicare prescription drug program would not achieve better patient care, sustainably cut the deficit, foster the development of future medical advances or grow the economy," said John Castellani, head of the Pharmaceutical Research and Manufacturers of America.

The health care industry is also concerned about Obama's push to bolster the Independent Payment Advisory Board, which was created by health reform to keep Medicare costs under control. The president called for allowing the board to make recommendations to Congress on how to reduce the rate of Medicare's growth earlier in the process.

Medical professionals have never liked the board, known as IPAB, which they say could enact broad changes to Medicare without lawmakers' input. And the board is barred from restricting benefits or raising beneficiary costs or eligibility requirements.

So, the industry fears that the board's chief tool to keeping down costs will be to cut reimbursement rates.

"It will increase their losses for the Medicare patients that they treat," said Paul Keckley, executive director of the Deloitte Center for Health Solutions. This could force doctors and hospitals to raise rates on non-Medicare patients.

Lower rates may also force some providers to stop treating those on Medicare.

"The president's proposal to expand IPAB only furthers the largest problem facing Medicare patients, and that is access to physicians," said Dr. Alex Valadka on behalf of the Alliance of Specialty Medicine. "Doctors cannot continue to ably treat Medicare patients if they are constantly wondering whether or not the money will be there to reimburse them."

Ryan would reduce the government's health care obligations by shifting seniors to private insurance plans, but giving them a subsidy to help cover the cost. The proposal, which would impact everyone under 55 today, would also raise the Medicare eligibility age to 67, from 65, by the 2030s.