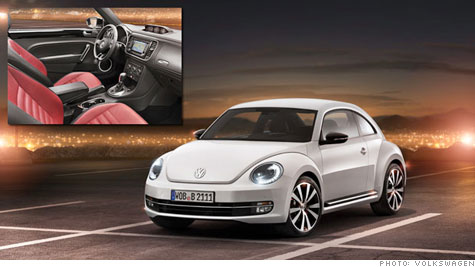 The 2012 New Beetle is a more aggressive take on an icon of cuteness. By Peter Valdes-Dapena, senior writerApril 18, 2011: 4:36 PM ET
Follow Peter on Twitter: @PeterDrives

NEW YORK (CNNMoney) -- The 2012 New Beetle, the car that Oprah Winfrey gave away to her audience back in November, is finally ready to show itself in public.

The car was unveiled Monday at events held simultaneously in New York City, Berlin and Shanghai.

Talk show host Oprah Winfrey gave 275 of the cars to her studio audience as part of an "Oprah's Favorite Things" promotion. Volkswagen donated the cars for the promotion.

Volkswagen's newest New Beetle, which goes on sale in the fall, sports a lower, meaner look than its bubble-shaped predecessors. The 2012 New Beetle is six inches longer, a little over three inches wider and half an inch lower than the old New Beetle, which was last produced as a 2010 model.

The flower vase that had adorned the dashboard of the previous New Beetle is gone in this version. It didn't fit the new its more masculine stance, VW lead designer Klaus Bischoff said at the New York event.

Fuel economy for the New Beetle is improved by about 10%. The non-turbo gasoline engine is estimated to get 29 mpg on the highway, and 22 mpg in the city with a six-speed manual transmission. The diesel-engined Beetles gets 40 mpg highway and 29 mpg in city.

The new New Beetle will be available with a panoramic sunroof stretching nearly all the way from the windshield to the back window. Customers will also be able to get a variety of "wraps" -- or adhesive patterns -- added to the car.

VW's New Beetle was first introduced in 1998, 60 years after the introduction of the original Beetle in 1938. In total, about 22.5 million Beetles, new and old, have been sold worldwide, according to Volkswagen.

Volkswagen has publicly committed to very aggressive sales goals in the U.S. market. By 2018 the automaker hopes to sell at least 1 million vehicles in the U.S. counting both its Volkswagen and Audi brands. The two brands sold a combined total of roughly 360,000 vehicles in 2010.

If Volkswagen hopes to make those goals, it needs to improve the quality of its products while retaining the factors that have made the brand unique, said George Peterson, an industry analyst with the consulting firm Autopacific. Those factors include high-quality interiors and fun driving dynamics.

"If they can keep their vehicles with a very Volkswagen personality, they may have a chance to pull it off," he said.

VW's most recent model introduction, a new version of the Jetta compact sedan, has been skewered by auto critics. Consumer Reports magazine, regarded as the most influential publication among America's car buyers, ranked it last in its category. Regardless, the car, which is priced lower than the previous version, has sold well.