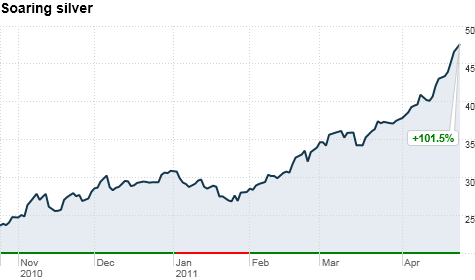 NEW YORK (CNNMoney) -- Silver prices have doubled during the past six months, and are now within spitting distance of $50 an ounce, a key level for the precious metal.

As the trading session went on, prices pulled back from the lofty levels, with silver finishing the day up 2.4% to settle at $47.15 an ounce.

"The metals are getting a lot of attention right now," said Terry Hanlon, president of Dillon Gage Metals, a precious metals trading firm based in Dallas. "We'll run right through $50 per ounce for silver any day now, and two months from now, we won't even remember it as a benchmark."

Both gold and silver, which is often called the poor man's gold, have taken on the role of currencies as the dollar loses its luster and inflation fears run wild, said Hanlon. He expects gold to top $1,700 an ounce and silver to reach $75 an ounce within a year.

"This is a huge safety play," he said. "Investors can't sit on their cash anymore because the value of the dollar keeps deteriorating. To offset that, they're parking money in precious metals."

The dollar: 98-pound weakling of currencies

The dollar index, which measure the greenback's value against a basket of currencies, has fallen more than 6% in 2011.

A number of factors are driving investors away from the dollar and toward safe- haven investments such as gold and silver. Among the reasons are deficit problems in the United States and Europe, and rapidly rising food and commodity prices, especially in emerging markets.

Ongoing political tensions across the Middle East and North Africa also have investors on edge.

Nichols, who considers himself to be particularly bullish, says gold prices could reach $3,000 an ounce within the next few years, as silver prices double to nearly $100 an ounce.

But those levels won't come without major hiccups -- 10% to 20% short-term pullbacks -- along the way.