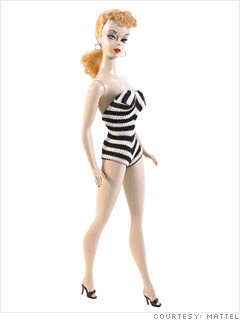 The first Barbie, which debuted in 1959 at New York's Toy Fair, originally sold for $3. Shown here wearing her now-iconic black-and-white bathing suit and kitten heels, Barbie was like no doll America had ever seen. In a market populated by plush baby dolls, Barbie brought Parisian fashion and grown-up sophistication to young girls, and she resonated with consumers: In her first year, Barbie sold 300,000 dolls.

A working woman with impossibly long legs and dozens of chic outfits and accessories, today Barbie still dares girls to become anything they want -- from "a mermaid to a movie star" -- as Barbie's new mission statement reads.