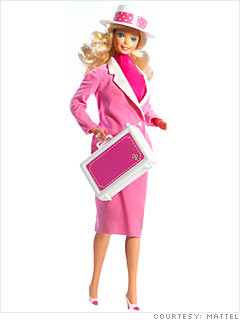 Barbie may have had a long career, but with a resume that includes being Miss America, a ballerina, and a flight attendant, it's not hard to see why anti-Barbie feminists say she promotes the wrong stereotypes. But Barbie was a professional woman who, from the looks of things, struggled with job equality just as the real women of her time did.

She became a career girl in 1963, dressed to impress in a gray tailored suit, and though it took her a few decades more, she finally reached the top of the corporate ladder in 1983. Decked out here in pink, "Business Executive" Barbie worked her power suit and, in the new millennium, even took calls on her cell phone.

With such success, it's perhaps no surprise that Barbie dumped Ken in 2004: She may have been tired of being the sole breadwinner.