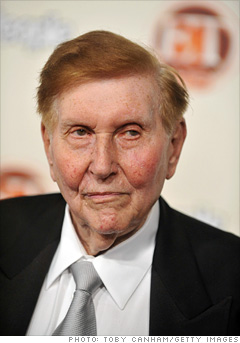 The media tycoon still has a lot of fight left in him -- and he's using it, struggling to keep control of his empire amid falling stock prices at Viacom and CBS. He has waged public wars with everyone from Tom Cruise to his own daughter.

Sumner has said he feels decades younger than his 86 years, which he attributes to antioxidant drinks, tomato juice, vodka, and wine.