8 great companies to retire from 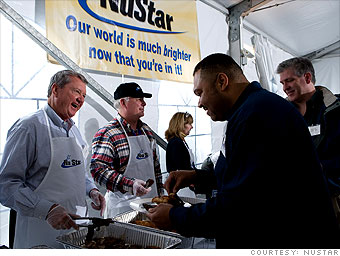 NuStar Energy, a pipeline and logistics company, offers employees a combined plan, but the pension pulls most of the weight.

That's especially notable since NuStar is a young company -- it opened for business in 2001, long after most companies began ditching their defined-benefit plans in favor of individual savings accounts.

NuStar's pension gives retirees their full salary for one-and-a-half times their years of service: work 20 years and get 30 years' worth of your full pay, assuming you haven't retired early. That's in addition to dollar-for-dollar 401(k) matching, up to 6% of pay, and a $1,000-deductible medical plan.

Paste this link into your favorite RSS desktop reader
See all CNNMoney.com RSS FEEDS (close)
More on Retirement
• Retire without taxes
• Will you be ready for retirement?
• A 24-year-old savings junkie
• Health insurance: My biggest gripe
More Galleries