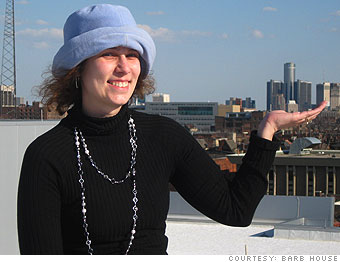 Barb House, a project manager at Wayne State University, has the whole city in her hand.
• Talkback: Tell us why you love Detroit
Lived in Detroit: My whole life
Favorite spot: A renovated house on Warren Avenue

Every morning, I take Warren Avenue to work. For nearly a decade, I've driven past a dilapidated old house that always caught my eye. Maybe it was the odd combination of triangular and circular windows. Maybe it's because the home reminds me of an old farmhouse where my father was raised.

In any case, the house always attracted me because it was so beautiful and it wasn't falling down - it just needed some major repairs. For years, I wished I could afford to buy and restore it myself.

Suddenly, about a year ago, a fence appeared! I couldn't believe it. A few months later, the top-floor windows were replaced. Then, starting at the very top, someone began painting the trim. It makes me so happy to see someone working to create a home.

Why I love Detroit: I hate to say it, but there are so many other houses in disrepair. This Warren Avenue home gives me hope that the city will come back. It might take 10 or 20 years, but it will happen.

Detroit has such a bad reputation around the world. But it's such a vibrant city, with many gorgeous little neighborhoods. Why wouldn't people want to live here?