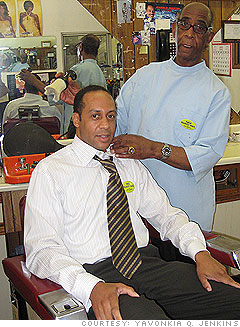 Big D's Barber is legendary. It covers half a city block. It's a pillar of the community; on the northwest side of Detroit, everyone knows Big D's.

Big D's is a testament to the fortitude of this city and to those who believe we can make it into a great community again. People get their first haircut here and come back for their whole lives.

Norm is a highly-opinionated, friendly, hardworking man. He walks about two miles to work every day, though I'd guess he's probably in his 60s. He's just great to be around. And in 15 years, he's never told me he can't make it - even when I need him to meet me for a shave and a haircut at 5 a.m.

Why I love Detroit: Detroit residents support those who are part of the city's mosaic. Often they're working-class, blue-collar people who want to see their kids have better lives.

And I think that can happen, because Detroit is turning around. We have a great downtown, talented sports teams, the busiest waterway in the country, tax incentives for filmmakers, newer houses and more green space than most large cities.

Obviously we've had issues, but a lot people here have invested time and energy into a 21st century city. People here believe it can be defined by its brighter future, not its bleaker past. Detroit can make itself into a prime U.S. city again. I believe we're destined for it.