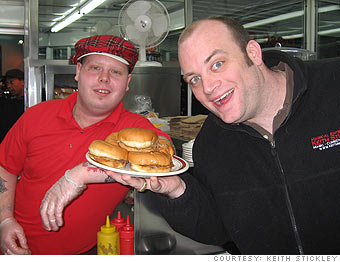 This is a classic 24-hour diner that opened in the 1950s and hasn't changed a bit. It's like Cheers, but with hamburgers. You know, everyone knows your name.

It's still owned and operated by the original family, and after two visits you're considered a regular. All the seats are at the counter, so you're going to be in the middle of the conversation no matter what.

It's the eclectic customers and staff who make Telway a really good time. The patrons are so diverse - business execs on their way home with a greasy sack of burgers, to a really crazy post-bar crowd.

This awesome old lady named Nancy works from 11 p.m. to 5 or 6 in the morning. She's about 80 years old, but she's the wildest thing you'll ever meet. She'll rant about the three husbands she outlived and she'll play practical jokes on the customers.

But of course, the food is great. I always get four sliders and chili fries. The burgers are an ounce or two, with super-strong grilled onions and a special seasoning. It's a hush-hush secret, and I probably don't even want to know what it is.

Why I love Detroit: A lot of the city's reputation is well-earned, sadly. Things are bad here. But those conditions make the people who stick around into tougher individuals. The people in Detroit are like none other. They take things in stride, because they're forced to adapt.

I'm on the road about eight months of the year, and I always look forward to coming back to Detroit - especially because my girlfriend picks me up from the airport and we go straight to Telway. That's how I know I'm home.