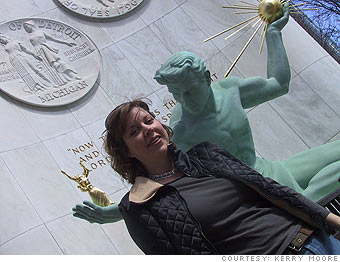 Kerry Moore, who owns a furniture design/manufacturing company with her husband, Bryce, mugs in front of "Spirit of Detroit" on Woodward Avenue.
• Talkback: Tell us why you love Detroit
Lived in Detroit: 9 years
Favorite spot: Woodward Avenue

This street is the Champs-Elysees of Detroit: A beautiful, wide boulevard that shows where the city has been and where it's going.

Many people take major roads to expedite their trip, but I prefer the old-fashioned route. Detroit is a cruising town, and I love to drive as I watch the city's history - good and bad - unfold.

Woodward is the artery of the community. It passes through 8 Mile, the Michigan State Fairgrounds, the waterfront, the first Model-T assembly plant, libraries, colleges, stadiums and so much more. There are stretches of neglect juxtaposed with pockets of up-and-coming redevelopment, and I see the city's new possibilities reflected there.

My favorite part of Woodward is Marshall Frederick's 'Spirit of Detroit' sculpture in front of the City-County Building. It's a huge, beautiful work of art that shows people reaching up to an elusively high ray of light above. It's that desire to re-invent constantly.

Why I love Detroit: A lot of people think we're a city of the past, but it's imperative for our city to evolve. And we do. In my experience, there's no other place like Detroit. It's raw and honest but beautiful and hopeful.

No other city has potential like Detroit. It's somewhat of a blank slate, so it can become a truly 21st century city. I see it on the horizon, and I'll be here when it happens.