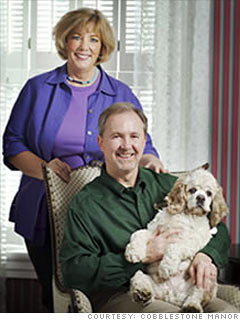 Chrysler's problems hit very close to home for Paul and Heather Crandall. They can see Chrysler's headquarters from the windows of their bed and breakfast, Cobblestone Manor.

The Crandalls bought a historic home in Auburn Hills 14 years ago and renovated it to open Cobblestone in 1998. The 10-room inn has often housed executives visiting Chrysler and other nearby companies: Paul Crandall estimates that 90% of the inn's clientele in past years has been related to the auto business.

Cobblestone was especially popular with European and international clients, who preferred Cobblestone's Victorian atmosphere to that of larger hotel chains, Crandall says. But Cobblestone's guest mix began to change when German automaker Daimler sold Chrysler to the U.S. private equity group Cerberus Capital in 2007. Then, in April, Volkswagen of America moved its headquarters from Auburn Hills to Herndon, Va.

The loss of business from European travelers resulted in a 21% revenue loss for Cobblestone in 2008, after seven straight years of growth.

The losses prompted the Crandalls to rethink their strategy. They now market the inn more heavily to pleasure travelers and locals seeking a night out on the town. Cobblestone has begun selling package deals, such as one that includes dinner at a nearby restaurant, and another that features spa treatments. The Crandalls increased the inn's marketing budget by 15% to promote the deals online, which Paul Crandall says has generated new business.

Weddings also have become a growing market for Cobblestone. Last year, the inn hosted 60, and Paul Crandall expects that number to increase as word spreads of Cobblestone's suitability as a wedding venue.

Meanwhile, the Crandalls have cut the inn's maintenance costs by about 20%, mostly by doing repairs and renovations themselves instead of hiring outside help.

"It saves us a tremendous amount of money," says Crandall, who also has two part-time employees.

The Crandalls see a potential light at the end of the tunnel: With Chrysler considering an alliance with Italian automaker Fiat, they hope more European business travelers will return to the area and to Cobblestone Manor.

NEXT: The secret to success: Pulled pork