Growing by banding together 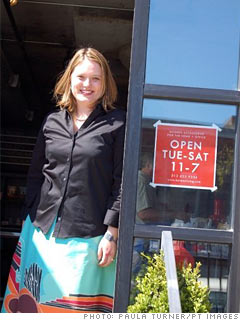 Two years ago, Claire Nelson opened the Bureau of Urban Living, a store that sells items such as dishes, decorations and stationery. Nelson, who is originally from Chicago and used to live in Brooklyn, says she opened the store so that Detroit residents like her could buy home goods without having to travel to the suburbs.

"I wanted to serve a community that includes myself," says Nelson, whose store has one part-time employee.

Sales for Bureau were tough last year. Though Nelson declined to discuss numbers, she says the store saw a dip in its business during the later part of 2008. She believes it's the national economic turmoil that spooked her customers - the auto industry was already struggling when she opened in 2007.

Nelson has worked to keep Bureau going by cross-promoting the store with other local small businesses and making extra efforts to accommodate customers, to keep them coming back. At times, she'll gift wrap items for free, or handle specials orders on request.

"Our customers are very loyal," Nelson says. "We appreciate their business, and we do whatever we can do to help them."

Nelson also helps organize Open City, a monthly meeting of Detroit entrepreneurs and others looking to start businesses in the city. The meetings, which often include presentations from business-development and lending experts, attract about 50 attendees each month. Several Open City members have gone on to start local businesses, including a few restaurants, a salon and a bookstore.

While doing business in the city can be difficult at times, Nelson says Open City provides strength in numbers for entrepreneurs such as herself who are trying to keep going despite Detroit's tough economy.

"My success here depends on other pieces of the puzzle coming together to help that happen," Nelson says.

While Detroit has depended on the auto industry for decades, Nelson believes small businesses will be the key to Detroit's economic recovery. They keep investing in Detroit when large corporations won't, and they serve a Detroit population that is often underserved by traditional retailers, she says.

"Small can be powerful."

NEXT: 'A ripple effect all of the way down'