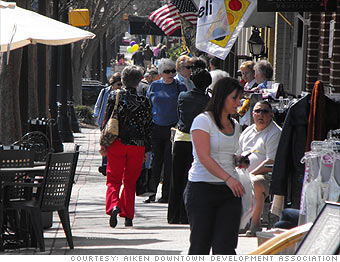 Looking for ways to boost their local economy, staffers at the Aiken Standard came up with a catchy plan in April: Publicize the power of the $20 bill.

As the newspaper's reporters put together an article about the impact of spending locally, the sales team offered business owners a one-day, cut-rate deal: an ad for $20, less than half the usual cost. In its April 19 edition, the newspaper ran the story and the discount ads, with an extra hook. It asked readers to spend $20 at local businesses the next day, the 20th of April.

"We helped the community," says Managing Editor Mike Gibbons. "Boutique shops downtown get hammered in this type of recession. So when people walked in, they asked, 'Are you here to spend your twenty?' That gave a sense of community and togetherness."

Gibbons's wife splurged on gourmet foods, and his boss bought a tie. Gibbons picked up a birdfeeder at Ron Brenneman's Birds and Butterflies, a supply store for gardening and birdwatching enthusiasts.

"It sounded like a novel idea," says Brenneman, whose business has been struggling this year. "We weren't sure at the time how it might work, but we were very pleasantly surprised and pleased. We saw significant increases in income during that day, but it also spread to other days with the people who said they couldn't come on the 20th. I think it increased awareness about the importance of the local economy."

A downtown restaurant sold out of its $20 special, and a spa was fully booked for its $20 massage offer. "People had fun with it," Gibbons says.

In May, the paper ran the deal again and sold even more ads. But now they're taking a break, not wanting to wear out the campaign. "We'll do it in the back-to-school season," Gibbons says. "I think that if we can do it a few times a year, we can come up with new ways to try and get people excited about jump-starting the economy."

The "$20 on the 20th" message has spread beyond Aiken's 25,000 residents. Newspapers such as the Yuma Sun in Yuma, Ariz., and the Salisbury Post in Salisbury, N.C., have picked up the campaign and run local versions.

NEXT: The Independents Week Challenge