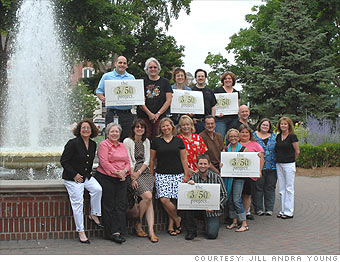 Tanja von Kulajta, in black and white skirt, stands with the other business owners in downtown Plymouth.
Plymouth, Mich.

Retail consultant Cinda Baxter was tired of hearing about bad economic news. She decided to take action, and created the 3/50 Project. The program encourages consumers to pick three small businesses that they don't want to see disappear and spend $50 each month at them.

"The Web site went live on March 30, and it went viral in a heartbeat," she says. "I spent first month trying to keep up with it."

Entire towns have jumped on board with the campaign, such as Plymouth Mich., which has more than 30 downtown businesses registered. "The 3/50 Projects shows people that by coming here and spending $50, or even $10, it stays in community," says Tanja von Kulajta Winn, owner of RSVP, a local stationary and gifts store. "When we talk about it with customers, they say, 'I'm doing my part and spending my $50 at this store.' It takes a while to develop habits, but the movement is growing."

It's hard to be a resident of Plymouth without noticing the campaign. In the last few weeks, yard signs with the 3/50 logo have popped up on lawns as if it were an election season. Flyers are ubiquitous in the downtown area. The library printed 3/50 bookmarks and sticks them in books as they're checked out. And when customers spend money at participating stores, they can get a sticker showing their support.

"The grassroots efforts have had more effect on my business than the stimulus," says vonKulajta Winn. "I have not received anything from Washington, and I don't know if I'd even qualify. But the 3/50 project is an actual tool I can use."

Baxter thinks the promotion's directness is the key to its success. "There are many buy local programs that talk about economies. But that's not how people talk over the dinner table," she says. "This concept is much more simple -- pick three, spend $50. That's how we think."