Using $2 bills and "buy local" promotions, these 6 towns have launched their own campaigns to keep local businesses alive. 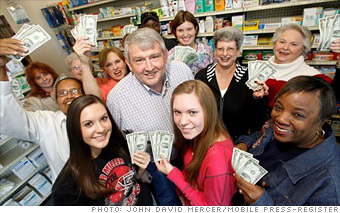 Danny Cottrell stands among his employees, holding Jeffersons.
Brewton, Ala.

Danny Cottrell, owner of The Medical Center Pharmacy, made his two dozen employees very nervous when he called them in for a meeting in early March. But after a few words regarding the dismal state of the economy, he did something unexpected: He handed each an envelope containing hundreds of dollars in $2 bills.

Cottrell distributed $16,000 in bonus money -- $700 each to full-time and $300 to part-time employees. He asked his workers to give 15% to a charitable cause and spend the rest locally.

"I didn't think it would make a major impact, but it took on life of its own," he recalls. "Brewton needed something right then -- some good news. We had been hit during the worst week of the market, and it was just the right story at the right time. My employees went to stores they'd never been in before."

Cottrell asked his staffers keep track of the shops they patronized. The list today stands at around 70 stores. The exercise demonstrated how the money moved within the community -- some of the $2 bills wound up right back in Cottrell's cash register.

"It was great to see people come in with $2 bills, though it got tedious when we had to count them out for $200 purchases," laughs Candy Smith, manager at Weaver's and Shades of Gray, a clothing and jewelry store. "Now, every time you see a $2 bill, it reminds you about shopping locally."

Following Cottrell's initiative, Brewton held its own "$20 on the 20th" campaign, similar to the one launched in Aiken, S.C. Smith says that residents love combining the promotions by spending 10 $2 bills. The combination of the efforts has brought more people into the store and boosted sales, she says.

Cottrell's mini-stimulus package has spread further. Inspired by the idea, Dave Theobald, owner of Turman Commercial Painters in Livermore, Calif., gave his employees $30,000 in $2 bills and started the Web site peoplesstimulus.org to track other companies adopting the campaign.