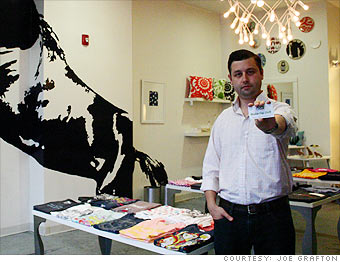 The 10% Shift has a very tangible goal: Motivate consumers to shift 10% of their spending to local businesses.

Started by The New England Local Business Forum (NELBF), a coalition of sixteen organizations representing every state in the region, the campaign has drawn adherents throughout the area. "The movement came together in October, because the economic crisis was taking hold," says Joe Grafton, director of the Somerville Local First organization.

The campaign underscores the economics of buying local. NELBF points to a study from Civic Economics forecasting that if 600,000 area residents shift 10% of their purchases from chains to independent businesses, that local community would gain 1,600 jobs and $140 million in new economic activity within one year.

10PercentShift.org provides consumers with a calculator to figure out where they can make the shift in their daily budget, and asks shoppers to sign a pledge to buy locally.

Jon O'Toole, co-owner of Grand, a furniture store in Somerville, has 10% Shift business cards on his store counter. "The more and more we do it, the more it'll become accepted," he says. "Big Box stores aren't bad, but I'll most likely reciprocate in the town. I go to the same coffee shop every day with money from Grand."

While the movement hasn't given O'Toole much of a boost in sales, he says it's helping by building awareness. "If my customers talk about why they come in, usually they mention that it's because I am local," he says.

The concept has migrated beyond New England. Charleston, S.C., has launched its own 10% Shift campaign, and Grafton fielded calls from city planners in Chico, Calif., and several towns in New York who want to find out how a similar program could benefit their communities.