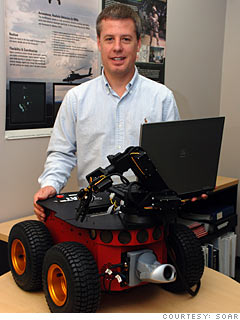 Soar Technology, a company that does artificial-intelligence research and development for military applications, has worked with nearly "every organization in the Defense Department that has the word 'research' in their name," says CEO Mike van Lent.

Having offices in Washington, D.C., would put Soar Technology closer to its core customers. But staying in metro Detroit is a quality-of-life choice for the small tech company.

"This is the atmosphere we'd rather live in," says van Lent, whose company has 25 employees in Ann Arbor and a small satellite office in Orlando. "We have deep roots in the area."

Soar Technology spun off from the University of Michigan's Artificial Intelligence Laboratory in 1998. The company creates software that simulates human behavior, such as a system that allows military commanders to interact with and command military robots with the same terminology they would use to instruct human teams.

"Our approach is to build the software systems so they think the way that people think," van Lent says.

Customers include the Defense Advanced Research Projects Agency, the Office of Naval Research, the Air Force Research Laboratory and TARDEC, a division of the U.S. Army Research, Development and Engineering Command located in Warren, Mich. The company currently is working on two non-military applications for its software.

The University of Michigan has continued to be a source of talent for Soar, and the Detroit airport provides Soar with easy access to its customers in Washington and Orlando. But negative news about the city of Detroit has caused Soar trouble with some of its attempts to hire staff from out of state.

"There's a sense of hesitancy to move to an area that's economically depressed," van Lent says.

NEXT: Powering the health care overhaul