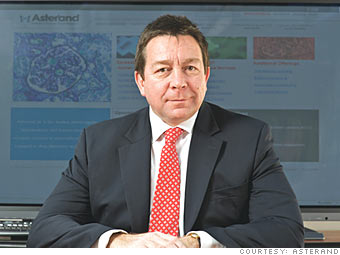 Think Detroit is only good for industrial labor? Asterand wants to turn the city into a world leader in medical and pharmaceutical research.

Located inside Detroit's TechTown business incubator, Asterand is a human-tissue bank that collaborates with pharmaceutical companies on drug discovery and development. The company had 2008 revenue of 15.2 million pounds, or about $25 million, and was the top performer on the London Stock Exchange last year.

"There is enormous potential for growth and change, and a small company in Detroit is right in the middle of it," says CEO Martyn Coombs.

Asterand plc's predecessor, Asterand Inc., was founded in Detroit in 2000. Asterand went public on the London Stock Exchange in 2006, after it merged with U.K.-based Pharmagene. Asterand has about 90 employees in Michigan, the United Kingdom and Japan, but Detroit has the most employees and is the company's global headquarters.

Detroit's airport is a key asset for Asterand: It's a major hub that allows the company's executives to easily travel worldwide. Another perk: Michigan has "some of the best universities in the country," Coombs says, including the University of Michigan and Michigan State University.

"We have a highly educated and dedicated workforce in Detroit, and that's the key to our business," he says.

Asterand has had lower staff turnover in Detroit than what the company would have expected in other major cities, Coombs says. That loyalty has inspired Asterand to stay loyal to Detroit over the years -- so much so that the company just signed a new three-year lease to stay in TechTown.

"We're very proud of our heritage in Detroit, and we feel a responsibility for changing the wider situation in Detroit by staying," he says.