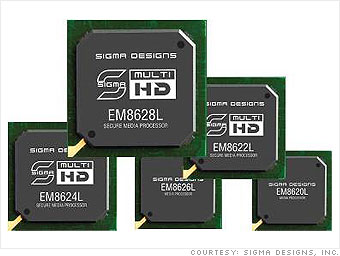 This chipmaker's growth has mirrored the rising popularity of new consumer favorites like HDTVs and Blu-ray players. Sigma makes so-called system-on-chip solutions -- processors that are used to decode high definition video and power multimedia software for television sets and other consumer electronics.

The firm worked with Microsoft on its Mediaroom TV box, which allows users to watch six channels at once and steam music through their televisions. The Milpitas, Calif.-based firm's three-year annualized earnings-per-share growth is an amazing 338%, while revenues grew at a 104% pace.

Sigma recently announced a partnership to include home energy monitoring and security controls in its TV set-top boxes.