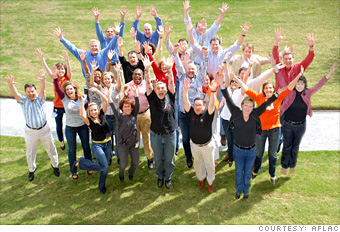 The recession didn't fall off Aflac like water off a duck's back. Although the supplemental insurance provider delivered a strong financial performance in 2008, CEO Daniel Amos chose to forgo his $2.8 million bonus to reflect the company's depressed stock price. CFO Kriss Cloninger also reduced his 2008 bonus by a third to about $830,000.

Aflac's stock fell nearly 27% in 2008 and another 75% during the first quarter of 2009. But since their March low, shares have more than tripled. Executives have not said if they will accept bonuses they earned in 2009.