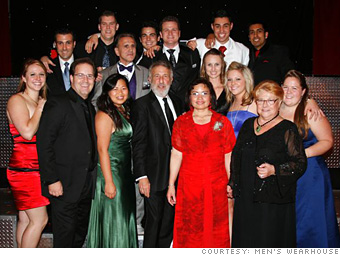 To make sure his employees liked the way he looked, Men's Wearhouse CEO George Zimmer shaved his 2009 salary by 20% to $336,000. Meanwhile, the discount retailer's directors took 10% compensation cuts, while senior executives had their pay reduced by 5%.

The 13,000-person company trimmed its staff by 6% in the last year, but it did not reduce salaries of remaining employees as it battled a 2008 profit decline of 60%.

After a series of deep-discounting promotions, profit jumped 12% in the first three quarters of 2009. Men's Wearhouse said pay reinstatements will be considered when it closes its annual books at the end of January.