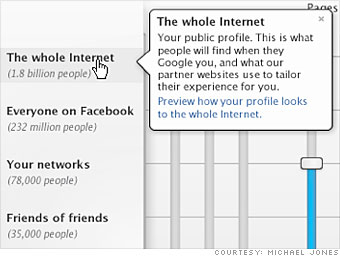 Public is well, public. People obviously don't have a problem posting stuff to the Internet -- look at all the blogs, Twitter, and Flickr accounts floating out there now. What they do have a problem with is things ending up in the public space that they didn't expect to be there.

So I think the new design should make it really clear that some stuff is public info, and that's OK. It shouldn't feel like you're running around trying to stick your fingers in the holes where the Facebook dyke keeps leaking. Then we only need one public policy, and not a million different settings for how Google, Yelp, or whoever handles your stuff. Also, your settings should trump your Friends' settings for your stuff. In other words, if you're not sharing your 'Things I like' publicly, your friends shouldn't be able to share that info publicly.