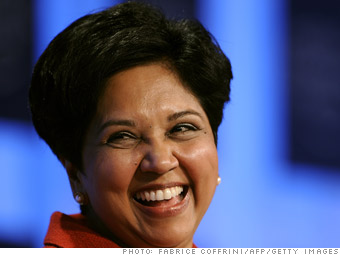 Indra Nooyi has become known in the business world as someone who isn't afraid to shake things up. A big personality in charge of a bigger company, Nooyi helped spur PepsiCo to expand its portfolio to include healthier brands like Tropicana and Quaker Oats. CEO since 2006, she now oversees the company's nearly 300,000 employees with a global portfolio that includes the ubiquitous FritoLay, Lipton and Gatorade -- bringing in nearly $60 billion in revenue.

Pepsi-Cola lost a little fizz this year when the news broke that Diet Coke surpassed it as the second most-popular soft drink in 2010. Critics called it a repudiation of Nooyi's bold community-based advertising strategy (the company chose to forgo Super Bowl ads in 2010 in favor of a $20 million campaign on Facebook).

But that hasn't set her back, and the company is honing in on its global strengths -- half of its revenue comes from outside the States and it sells 40% of the world's salty snacks. Plus, Nooyi is plowing ahead with healthier options. About $10 million in sales comes from healthy products -- a number PepsiCo aims to triple by 2020.