Tight lending in focus as a key measure reaches highest level ever.

'Gambling with the public trust' 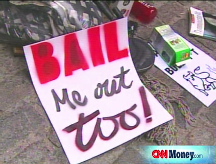 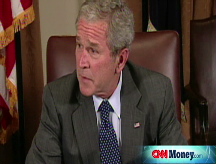 NEW YORK (CNNMoney.com) -- Just when it looked like relief was on its way, lending seized up again Friday.

With the Treasury's $700 billion financial industry bailout proposal in jeopardy, and with Thursday night's collapse of an agreement and subsequent JPMorgan Chase takeover of Washington Mutual - the largest bank failure in the nation's history - credit markets have again stalled.

"Things have frozen over again," said Steve Van Order, chief fixed income strategist with Calvert Funds. "Banks are nervous about lending to each other, and the commercial paper market has come to a standstill."

Market gauges of lending showed higher prices for loans between banks. When lending tightens in this way, businesses and consumers have to pay more for loans, such as mortgages, or can't get them at all.

For instance, one gauge that banks use to determine lending rates rose to an all-time high. The difference between the London interbank offered rate, or Libor, and the Overnight Index Swaps rose to an unprecedented 2.08%. The Libor-OIS "spread," or difference between the two rates, measures how much cash is available for lending between banks. The higher the spread, the lower availability of cash for lending.

Another lending measure was just below a 26-year high. The "TED spread" - the difference between three-month Libor, what banks pay to borrow money for three months, and the three-month Treasury borrowing rates - was at 2.94% after hitting 3.37% Thursday, the widest margin for that measure since 1982. Just a three weeks ago, the TED spread was at 1.04%.

With loads of troubled assets on their balance sheets, banks are hesitant to take on more loans if the risk of default is high. Furthermore, when banks need to write down those assets, they have less cash on hand to issue loans. That stops the financial system's gears from turning, in turn hurting customers who need a loan to finance a home, a car or tuition.

"The interbank lending markets are clogged up, because there is a freeze-up in the pipes that normally carry funding from central banks to banks to customers," Van Order explained.

How WaMu makes it worse: The announcement that JPMorgan Chase (JPM, Fortune 500) acquired the banking assets of Washington Mutual (WM, Fortune 500) late Thursday after the beleaguered thrift was seized by federal regulators sent yet another shock to already skittish lenders.

"JPMorgan is going to have to take a writedown and ultimately raise capital," Van Order said. "The bank's lines of credit are being drawn on...and the acquisition puts another strain on lending."

As JPMorgan tried to finance its purchase, it priced $10 billion in new capital Friday morning, building on the $8 billion that was included in the deal. But other banks without the access to capital that JPMorgan has are finding loans hard to come by.

"More financial corporations are finding it tight in the commercial paper market," Van Order noted. "Some corporations are using lines of credit with banks, and as those get tapped it uses up marginal capacity to make new loans."

The bailout's impact: With the credit markets all but stopped, the Bush administration hopes that the removal of risky assets from the financial institutions will restore the flow of credit. But as partisan politics put the enactment of a bill in doubt, banks worry that the wrench in the gears may not be removed anytime soon.

"If banks don't have the market to sell off illiquid assets, we're just going to be stuck in the same situation a year from now," Van Order said. "There's just no market for whole classes of asset- backed securities, and the government is the only one that is large enough to create a market."

With the government - the only potential buyer - debating whether or not to make the deal, financial institutions continued to invest in less risky assets such as government bonds.

Treasurys: The unprecedented events of the past two weeks have had investors moving into and out of Treasurys quickly. U.S. government bonds are considered one of the safest places to keep assets and as anxiety in the marketplace increases, so does demand for Treasurys.

"The holdup of the rescue plan and of course the failure of WaMu is once again flocking investors toward safety," said Peter Cardillo, chief market economist at Avalon Partners.

The yield on the 3-month note rose to 0.85% from 0.74% as prices ticked higher. Yields on 3-month Treasurys have remained at very low levels as demand for the notes has increased amid the uncertainty in the financial markets.

The 3-month note is a popular asset for money markets looking for stability because it offers a safe place to park cash on a short-term basis.

On Thursday, bond prices were mixed as key lawmakers announced they had reached an agreement for the proposed $700 billion bailout of the financial system, which has been battered by the collapse of the housing market. Investors started tip-toeing out of the safe haven of government bonds; stocks rallied, sending the Dow Jones industrial average up 197 points.

But the bank failure and the breakdown in the bailout agreement sent investors running right back to the safe haven of Treasurys.

Looking for a lifeline: After days of negotiations in Congress, lawmakers said Thursday they were taking a revised bailout proposal to Treasury Secretary Henry Paulson.

But a meeting at the White House later Thursday between President Bush, Congressional leaders and the presidential candidates failed to provide a conclusion, sending fresh anxiety to Wall Street that maybe the much-needed relief was not imminent.

"The financial markets are burning and the politicians are playing politics," said Cardillo. As the uncertainty mounts as to what form a bailout would eventually take, investors are returning to the perceived safety of government bonds, sending the prices of Treasurys higher.

As the situation in the financial sector continues to deteriorate, "people are trying to protect their assets and they are running into Treasurys," said Cardillo.

In order to pay for a costly rescue plan, the government would need to sell a lot more debt. On Thursday, the government auctioned $24 billion worth of 5-year notes. The Treasury received bids totaling nearly $46 billion, with a median yield of 3%.

What about my job?