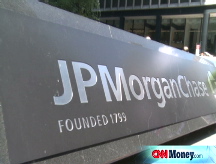 NEW YORK (CNNMoney.com) -- Treasury Secretary Henry Paulson said on Friday that the U.S. government was working on a plan to buy stock in financial institutions by using part of the $700 billion authorized by Congress to stabilize the financial system.

"We are working to develop a standardized program that is open to a broad array of financial institutions," Paulson said.

"Such a program would be designed to encourage the raising of new private capital to complement public capital," he said following a meeting of G-7 finance ministers and central bankers.

Any shares purchased by the U.S. government would be non-voting shares except, he said, "with the respect to the market standard terms to protect our rights as investors."

Paulson said that developing a standard program is the best way to "use taxpayer money more efficiently and have it go farther."

He didn't specify what the government's terms would be for companies that take part in the capital injection program.

Earlier this week, the United Kingdom said its Treasury would provide as much as $88 billion to eight big banks in need of capital.

The authority Congress granted to Treasury to use up to $700 billion to stabilize the financial system offers the Treasury a wide range of options, one of which will be to buy troubled assets from financial institutions so that they can get them off their balance sheet and start lending more freely again. But as with the stock purchase plan, exact details of how the troubled asset purchases will work haven't been finalized.

The stock market was thrashed this week as investors have been waiting to get more certainty on how the government's rescue plan will work. The credit markets, which have been seized up, showed a little loosening towards the end of the week but nothing to pop open the champagne over.

"They need the pricing details before there can be any sense of calm in the markets," said Jaret Seiberg, financial services analyst with The Stanford Group, a policy research firm.

Why taxpayers should own banks