Shares in Europe and Asia take another beating as fears of global recession deepen. 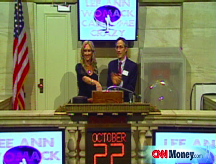 LONDON (CNNMoney.com) -- Stocks in Europe and Asia fell Thursday as fears of a global recession deepened after a grim day on Wall Street.

U.S. futures, which give an indication of how markets will open when trading in New York begins, were slightly lower.

European shares advanced in the early going but quickly gave up those gains. The U.K.'s FTSE 100 lost about 1% in midday trading while Germany's DAX shed 3%. The CAC-40 in France was down about 2%.

The weak outlook for earnings and falling crude prices hammered Wall Street on Wednesday, sending the Dow Jones industrial average down 514 points, or 5.7%. The point loss was the blue-chip average's seventh worst ever.

After U.S. markets closed Wednesday, Amazon.com (AMZN, Fortune 500) warned that 2008 revenue won't meet forecasts because the fourth quarter isn't shaping up as well as had been expected.

With 21% of S&P 500 companies already having reported results, third-quarter profits are currently on track to have fallen almost 10% from a year ago, according to the latest estimates from Thomson Reuters.

On the economic front in the U.S., a report on weekly jobless claims is due at 8:30 a.m. ET. The reading comes on the heels of a government report released Wednesday that showed the number of layoff announcements involving at least 50 workers rose in September to the highest level since the Sept. 11 terrorist attacks seven years ago.

Meanwhile, RealtyTrac, an online marketer of foreclosed properties, reported that 81,312 homes were lost to foreclosure in September.

In commodities markets, oil prices rebounded slightly Thursday from a 16-month low. U.S. crude for December delivery added $1.07 to $67.82 a barrel in electronic trading on the New York Mercantile Exchange.

The dollar slipped against the euro, British pound and Japanese yen.

CNN Wires contributed to this report.