Regulators close down Franklin Bank, a Houston bank with $5.1 billion in assets, and Security Pacific Bank of California, with assets of $561 million, raising the tally of failed banks this year to 19. 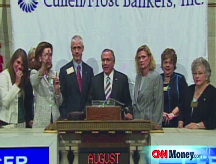 More Videos
Kashkari: 'We don't want to own banks' 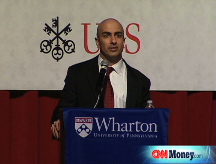 NEW YORK (CNNMoney.com) -- The tally of failed banks in 2008 rose to 19 as the government announced that a Texas and a California bank had been shuttered Friday night.

Franklin Bank (FBTX) had total assets of $5.1 billion and total deposits of $3.7 billion as of Sept. 30, 2008, according to a statement on the Federal Deposit Insurance Corp.'s Web site.

Ironically, Lewis Ranieri, the 61-year-old co-founder and chairman of parent Franklin Bank Corp., is credited with inventing mortgage-backed securities two decades ago, the AP reported, back when he worked at Salomon Brothers, where he is a former vice chairman.

Franklin Bank Corp. just Sunday said it had received proposals for transactions to strengthen Franklin Bank's capital position and was keeping regulators informed of the talks' progress, according to the Associated Press.

Prosperity Bank (PRSP), based in El Campo, Texas, will assume all of the deposits of the failed Texas bank, including those that exceed the insurance limit and brokered accounts. Depositors of the failed bank will automatically become depositors of Prosperity.

In addition to taking over the deposits of the failed Franklin Bank, Prosperity will purchase $850 million of assets. The FDIC will retain the remaining assets to dispose of later.

Pacific Western Bank of Los Angeles will assume all of the deposits of Security Pacific Bank and will purchase approximately $51.8 million of the assets. The FDIC will hold on to the remaining assets to dispose of later.

The failed Houston bank's 46 offices will open as branches of Prosperity under normal hours, including Saturday hours. The deal will give Prosperity more than 170 banking locations in Texas.

Security Pacific's four branches will reopen on Monday as branches of Pacific Western.

Customers of both banks should continue to use their existing branches, according to separate press releases on the FDIC's website. Dan Rollins, president of Prosperity Bank, in a statement said records will be fully integrated during the first quarter of 2009.

"The customers will be able to go about their business as usual; they will be able to access their money and use their ATM/debit card, Internet banking, bill pay service or other electronic banking services beginning Saturday morning," said Rollins.

Security Pacific customers can continue to access their funds via ATM, checks or debit cards, according to the FDIC.

In Friday's announcement about Franklin Bank, the FDIC said that the cost of its failure to the Deposit Insurance Fund will be between $1.4 billion and $1.6 billion.

Meanwhile, Security Pacific's failure, the third in California this year, will cost the FDIC $210 million. The FDIC said that for both banks, acquisition of their deposits was the least costly resolution.

Smaller regional banks have been under pressure as the financial crisis continues to take its toll.

Prosperity Chief Executive David Zalman said in a statement that his bank was "committed to taking care of their existing and new customers during this volatile time in the financial industry."

Year of the bailout - and now GM?