Treasurys: The pressure eases a little

A day after three major yields fell to all-time lows, bonds sell off. But credit remains tight and on shaky ground. 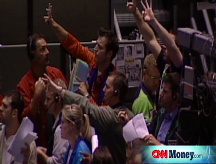 NEW  YORK (CNNMoney.com) -- Treasury yields bounced back Friday, as stocks rallied from a precipitous decline - a day after yields hit all-time lows in a warning that credit markets remain vulnerable and investors are hungry for the safety of government debt.

Yields for the 2-year, 10-year and 30-year government bonds fell Thursday to the lowest levels since the Federal Reserve began keeping records in 1962, rallying on more global economic turmoil and a freefalling stock market. Bonds and yields move in opposite directions.

Low yields are a sign of frozen credit, as banks and investors pour money into safe Treasurys rather than take the risk of lending funds to other institutions.

The federal government has unveiled copious programs - costing trillions of dollars - aimed at easing funding concerns for banks and encouraging lending between financial institutions. But bumps in the road such as Thursday's are a reminder that credit markets are on a very long path to recovery.

The Lehman Brothers Aggregate U.S. Treasury index returned 1.1% to investors Thursday, which would represent a pretty good yearly return for these traditionally low-risk, low-return investments. Investors holding long-term bonds made 4% on their investment, compared to a 6.7% decline for S&P 500 index fund holders.

For the year, bond holders have received a 9.3% return on their investment, compared to a 43% decline for S&P 500 fund investors.

But bonds had virtually no place to go but down Friday. Global stock markets rallied a day after the S&P 500 fell to an 11-1/2 year low. With the U.S. market in a rebound, they pulled money out of Treasurys and instead placed them in equities.

The benchmark yield curve, the difference between the 2-year and the 10-year yield, widened to 2.10 percentage points from 2.03 points, but is still down from a five-year high of 2.52 points set a week ago. The yield curve is a key measure of investor sentiment, with a higher curve generally indicating a weaker economic environment.

Meanwhile, the yield on the 3-month bill retreated to 0.02% from 0.07% earlier in the session and up from 0.02% on Thursday. The 3-month yield is still near low levels not seen since the height of the financial crisis, when it hit 0%.

The yield on the 3-month Treasury bill is closely watched as an immediate reading on investor confidence, with a lower yield indicating less optimism.

In another sign that credit has not yet returned to normal, the 3-month Libor rate rose slightly Friday for the first time in a week to 2.16% from 2.15%. The overnight Libor rate rose to 0.47% from 0.44%, according to Bloomberg.com.

Libor, the London Interbank Offered Rate, is a daily average of interbank lending rates and a key barometer of liquidity in the credit market. More than $350 trillion in assets are tied to Libor.

Though rates rose Friday, they have been trending downwards since rising to record highs at the height of the credit crisis in mid-October, helped down by the various government liquidity initiatives.

One such program, the Fed's Commercial Paper Funding Facility, has provided critical short-term financing to businesses in desperate need of cash. Fed reports released Thursday showed that the government bought nearly $14 billion of commercial paper in the past week.

But even as rates rose, two gauges of banks' confidence in the credit market indicated credit was slightly improving.

Another indicator, the TED spread, fell slightly to 2.09 percentage points before recovering to 2.14, even with Thursday. The TED spread measures the difference between the 3-month Libor and the 3-month Treasury bill, and is a key indicator of risk. The lower the spread, the more willing investors are to take risks.